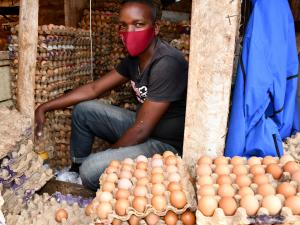 Kenya and Uganda are staring at another round of trade wars after Nairobi reintroduced a levy on eggs imported from the neighbouring country.

Uganda says Kenya is now taxing its eggs at a rate of Ksh72 ($0.6) a tray, bringing back a levy that had been suspended last December following bilateral talks between Kampala and Nairobi.

Ugandan traders have protested the move, saying it does not augur well for trade between the two countries.

“The implementation of levies on Ugandan eggs by Kenya is a bad policy and in violation of the East African Community policy of free movement of goods and services originating from the member states,” Godfrey Oundo Ogwabe, the chairperson Uganda National Cross-Border Trade told the Daily Monitor.

Kenya's Livestock PS Harry Kimtai said the charges could be a normal levy that is imposed on imports.

“I do not have specific information on the tax but this could be the normal levy that the Kenya Revenue Authority imposes on imports,” he said.

The new trade tiff comes at a time when the two countries are yet to resolve a long-standing dispute on milk after Kenya barred Uganda’s dairy products in 2019.

Kenya had in the last two years restricted the exports of poultry and dairy products from Uganda, straining the relationship between the two countries. The issue on poultry was resolved after Uganda threatened to ban Nairobi from exporting its goods to the landlocked neighbour.

The Ugandan cabinet had in November directed its Agriculture ministry to identify and list Kenyan products that will be banned by Kampala “in a short time” in retaliation to Kenya’s continued restriction on its agricultural products.

Kenya and Uganda have for long had trade fights but the latest hostilities between the two East African Community states began brewing in December 2019, when Kenya stopped importing Ugandan milk, particularly the Lato brand.

In 2020, Kenya blocked Ugandan sugar and sugarcanes, costing traders who were exporting raw cane to sugar mills billions of shillings as the raw material was left to rot on trucks at the border.