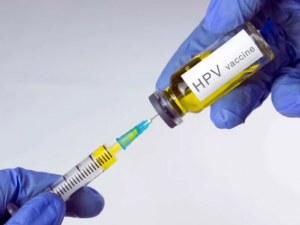 The long-awaited launch of the human papillomavirus (HPV) vaccination is expected to take place in Mombasa Friday.

By launching the highly publicised vaccine, Kenya will join 10 other African countries.

Although two HPV vaccines are currently prequalified by the World Health Organisation (WHO) - a bivalent and a quadrivalent vaccine. In Kenya, the vaccine that will be given Gardasil, also known as Gardisil or Silgard or recombinant human papillomavirus vaccine [types 6, 11, 16, 18], is a vaccine for use in the prevention of certain strains of human papillomavirus, specifically HPV types 6, 11, 16 and 18.

Gardasil is made by Merck Sharp & Dohme, an American multinational pharmaceutical company.

The roll-out was planned for early last year but has been postponed several times. “It was not by design that we had to keep shifting. One of the considerations before you start introducing a vaccine as a country and as a rule into the immunisation schedule, you must be assured of the continuous uninterrupted availability of that particular vaccine across all levels,” Dr Collins Tabu, head of Kenya’s National Vaccines and Immunisation Programme, during a recent press conference in Nairobi.

Cervical cancer is a critical public health issue in sub-saharan Africa, where it is the second leading cause of cancer among women and the leading cause of female cancer deaths, yet implementing screening programs in these countries has so far proven to be challenging due to financial, logistical, and sociocultural factors.

Despite the continent having a high incidence of cervical cancer, which the vaccine helps to prevent, African nations have been slow to roll out the Human papillomavirus (HPV) vaccination to their populations.

With a number of sub-saharan Africa countries now eligible for Global Alliance for Vaccines and Immunisation (Gavi) support for vaccine introduction,

According to the Health Cabinet Secretary, the country has in place more than 1.3 million doses of the HPV vaccine against a target of 800,000 girls for this year.

Although Gavi has negotiated with the vaccine’s makers for a price as low as $4.50 (Sh466.78) per dose for countries including Kenya — compared with over $100 per (about Sh10,373) dose in high-income countries — sustainability is a concern.

Despite receiving the help of funding through Gavi-subsidised prices, for a national rollout, a global scarcity of the vaccine means that only 10-year-old girls will receive it for free — in two doses, six months apart.

“Globally, at least 115 countries have the HPV vaccine within their routine immunization schedules," said Dr Tabu.

East Africa carries the highest burden of cervical cancer in the world, in part because of the high incidence of HIV in the region, which causes immune system suppression, according to Jacqui Drope, managing director of Global Cancer Prevention at the American Cancer Society.

Rwanda’s experience of achieving high vaccination coverage in their national HPV immunisation program is used as a case study to explore effective approaches to the design and implementation of HPV vaccination programs in sub-Saharan Africa, as factors including government ownership and support for the program, school-based delivery, social mobilisation, and strategies for reaching out-of-school girls have been touted to contribute to the successful implementation of the vaccine.

While HPV is common among sexually active women, those with HIV have a harder time fighting off the infection, she said.

In 2018, there were 5,250 cases of cervical cancer and 3,286 deaths in Kenya, according to the Ministry of Health. This equates to nine deaths per day, with the number of cases on the rise.

There are about 100 types of HPV, of which at least 14 cause cancer. Two HPV types (16 and 18) cause 70 per cent of cervical cancers and cervical lesions.

The vaccine is most effective when given to girls before they are sexually active and could be exposed to the virus. The government expects to provide it to 800,000 girls per year, shouldering 15 per cent of the cost, to begin with.