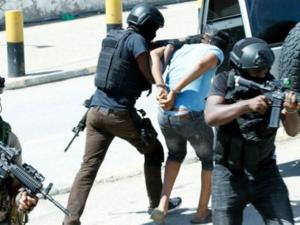 Mombasa. A 35 year old Tanzania national whose identity is yet to be revealed is among terror suspects arrested on Monday by Kenyan police in the coastal city of Mombasa, it has emerged.
Anti-terrorism police squad pounced on the Tanzanian and a 30 year old Kenya accomplice in a dramatic ambush at Mombasa’s Likoni Channel as they waited to board a ferry.
Police said the two suspects are Al-Shabab returnees with contacts in Mvita Mombasa and Kwale. Initial suspicion is that they planned to attack a police station in Mombasa on August 27, the death anniversary of fiery Sheikh Aboud Rogo.
The two were on Tuesday presented before an anti-terrorism magistrate’s court in Nairobi where the police were granted 21 days to complete investigations before charging them.
The suspect’s names will remain protected for purposes of investigation, according to the police.
The Tanzanian reportedly lived in Kenya before and in 2016 was among those involved in an ambush of Kombani Police Post in Kwale County. On January 2, they also allegedly attacked Tandoori Club in Diani, and also threw a grenade at a local police station.
The anti-terror unit is combing homes in Kwale for more accomplices linked to those in custody, after intelligence pointed to a house in Lungalunga where they were living.
The house also acted as a safe abode for weapons the ring had transported from the Democratic Republic of Congo through Tanzania’s Lungalunga border crossing before the Monday arrest.
Police believe the duo and their accomplices were radicalized by Mr Rogo who was gunned down in 2012 by unknown people in Mombasa. Intelligence reports have linked several youths who were radicalized by Mr Rogo are among those who have been unleashing terror in parts of the coast of Mozambique.
The new developments has put security agencies in the Coast region on high alert even as intelligence reports showed that Cabo Delgado in Mozambique had become the new frontier for radicalised youth, from the wider East and Central Africa region.
https://www.thecitizen.co.tz/tanzania/news/east-africa-news/kenya-police...