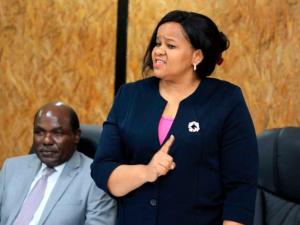 The divisions within the Kenya polls agency continued to play out Monday, with the chairman publicly clashing with his deputy in their first joint meeting after four of seven commissioners disowned the results of the presidential election.
During a meeting with candidates from eight electoral areas, which had their elections postponed, Independent Electoral and Boundaries Commission (IEBC) Vice-Chairperson Juliana Cherera hung her boss, Mr Wafula Chebukati, out to dry over the cause of the initial postponement of the elections.

After being invited by Mr Chebukati to explain to the candidates what informed the first postponement, Ms Cherera put aside the official script to lament the secretive nature of IEBC operations.
Insisting that commissioners were not reading from the same script, Ms Cherera charged some commissioners were intentionally kept in the dark regarding the printing of ballot papers.

Kenya's poll agency faces performance queries
“We talked amongst ourselves as commissioners and did what we call PR [a public relations exercise] to save face because we did not want the commission to be divided,” Ms Cherera said.

“We tried to put pieces together despite the fact that, as a commission, we didn’t even know the first ballot papers were arriving. We were only made aware on the night before the arrival,” she added.

She further detailed how, as part of a team appointed by IEBC to oversee the printing of presidential ballot papers, they were frustrated only arriving at the tail end of the printing process.
“We did not see Mombasa, Kakamega or Kitui Rural papers, and so I cannot take responsibility for ballot papers that I was not part of [their] verification. I rest my case,” she said.

Caught flat-footed, Mr Chebukati looked on, not knowing what to do, appearing cornered after Ms Cherera pulled a fast one on him.

Kenya polls agency split on presidential results
“The commission issued a statement on the issue and we apologise for the mix-up,” was all Mr Chebukati could say.
Since Monday last week, when Mr Chebukati declared Deputy President William Ruto the President-elect, IEBC has been divided into two camps with Ms Cherera leading one and Mr Chebukati leading the other.

Ms Cherera’s group has commissioners Justus Nyang’aya, Irene Masit and Francis Wanderi while Mr Chebukati’s camp has commissioners Abdi Guliye and Boya Molu, in what seems to be battle of wills between the newcomers to the commission and the old guard.

The four new commissioners, who rejected the presidential election results that Mr Chebukati announced said publicly that they cannot take ownership of the announced results.
They have also complained about being sidelined in the appointment of returning officers, amid claims that they were blindside by the arrival of the first batch of ballot papers.

In yesterday’s meeting at the Bomas of Kenya in Nairobi, the faction led by Ms Cherera sat close to each other save for Ms Masit who was sandwiched between Prof Guliye and Mr Molu.
Furthermore, Ms Cherera’s faction did not contribute to the proceedings after a round of introductions with the Chebukati-led wing dominating the session.
https://www.theeastafrican.co.ke/tea/news/east-africa/chebukati-cherera-...