Kenya tops world in China projects completion ahead of deadline 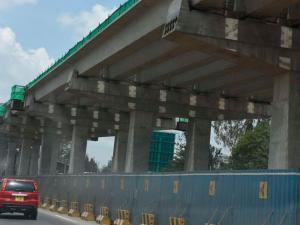 Kenya led the world in completing China-funded mega projects ahead of schedule under Beijing’s global infrastructure development strategy, findings of a new study by a top US research university suggests.

The report established five projects in the country that were done ahead of the deadline between 2013 and 2017, putting the country top amongst countries which have benefited from China’s Belt and Road Initiative (BRI).

The findings are contained in a report titled Banking on the Belt and Road which covered 13,427 projects worth $843 billion (Ksh93.23 trillion) in 165 countries all funded by China over 18 years.

“The … dataset demonstrates that some countries are encountering fewer obstacles than others during the implementation of BRI infrastructure projects,” the researchers wrote in the report, published end-September.

“Kenya is at the top of the list (of countries in the dataset with the highest number of BRI infrastructure projects completed ahead of schedule).”

Kenya is followed by Indonesia, Mongolia and Cameroon which separately had three projects done ahead of timetable, while Cambodia, Lao People's Democratic Republic and Zambia had two projects each.

China has over the last two decades established itself as a financier of first resort for many low- and middle-income countries, providing record amounts of international development finance, according to the researchers.

Funding
Beijing’s lending and grant-giving activities, however, remain shrouded in secrecy, they added, despite China outpacing the US in overseas development finance programme, committing about $85 billion (Ksh9.4 trillion) every year.

The researchers have singled out $3.5 billion (Ksh387.1 billion under prevailing exchange rates), 475-kilometre Mombasa-Nairobi standard gauge railway (SGR), funded more than 85 percent by China’s Exim Bank, for having been built at an “astonishingly fast pace”.

The SGR, which was Beijing’s BRI flagship project in Kenya, was completed 18 months ahead of schedule, having been started on December 12, 2014, and completed on May 31, 2017, as Mr Kenyatta raced to have it done ahead of his successful re-election bid.

The researchers wrote: “President Kenyatta acted as the “project owner” and assumed responsibility for resolving politically contentious matters that could delay or derail the project. He also identified a specific goal to guide the efforts of everyone involved in project implementation: putting the railway into operation before he stood for re-election in August 2017.”

On the other hand, state-owned China Road and Bridge Corporation (CRBC) — the SGR project— moved fast to create access corridors for wildlife migration, build high bridges for safe passage of wildlife such as giraffes after conservationists raised alarm over the project passing through Tsavo National Park.

“To help resolve contentious disputes, CRBC hired local people who were trusted by local residents such as pastors from nearby churches,” the researchers noted. “These ‘community liaison officers’ helped CRBC understand and respond to local grievances.”

China’s influence on the country’s infrastructure development started in earnest with the construction of the Thika Superhighway between January 2009 and November 2012 at a cost of nearly Ksh32 billion ($291 million) during the last term of President Kibaki.

CRBC, a subsidiary of China Communications Construction Company, has gotten the lion’s share of Kenya’s mega infrastructure deals besides SGR, projects which the firm says have helped build economic and trade ties as well as promote the friendship between Kenya and China.

They include Southern and Eastern Bypass in Nairobi as well as $398 million (Ksh44.02 billion) oil terminal at Kenya’s main port of Mombasa.