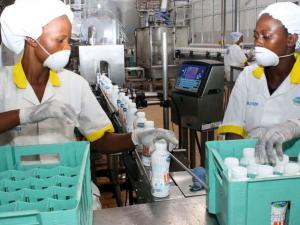 Kenya and Uganda have agreed in principal on a bilateral agreement that could put an end to the persistent trade dispute in sugar, fruit juices and pharmaceuticals between the two neighbouring countries.

The EastAfrican has learnt that under the agreement, Kenya has agreed to a demand by Ugandan authorities to allow more Ugandan sugar in the country in exchange for relaxation of duty on Kenyan exports of fruit juices and verification fees on pharmaceuticals to Uganda.

Kenya’s Principal Secretary in the Ministry of Trade Johnson Weru told The EastAfrican that a Kenyan delegation led by the Ministry of Trade will be visiting Uganda in April to seal the deal that will increase the amount of Uganda’s sugar exports to Kenya beyond the 11,000 metric tonnes per annum the country has been allocated by the Common Market for Eastern and Southern Africa (Comesa) council of ministers. In return, Kenya expects Uganda to abolish duty on Kenyan juices and pharmaceuticals that have made these products uncompetitive in the Ugandan market.

“On sugar we have sorted out the issues they (Uganda) notified us about and most likely there will be a government delegation going to Uganda to check a few things. We have been invited and we are now constituting ourselves to go. This was a mutual invitation,” Mr Weru told The EastAfrican in an interview last week.

Uganda has about 11 functional sugar mills producing about 510,000 metric tonnes, with local consumption estimated at 360,000 metric tonnes per annum with a surplus of about 150,000 metric tonnes, reserved for export. Last year, Uganda reached an agreement with Tanzania to start exporting sugar to East Africa’s second largest economy after months of negotiations since 2019.

Tanzania had locked out Uganda’s sugar on claims that the country was importing and repacking sugar for the export markets. Last year, Uganda reneged on an agreement to abolish 12 percent duty on Kenyan-manufactured fruit juices and removal of 12 percent verification fee on Nairobi's pharmaceutical exports, putting a strain on the neighbouring countries' trade ties. Kampala said it needed the revenue to meet its annual budget, while Nairobi said the tax makes Kenyan-made goods more expensive in Uganda. Kenya has also complained that the unilateral tax by an East African Community (EAC) partner State is in breach of the Customs Union Protocol.

However, Kenya feels that being parties to the East African Common Market Protocol the two countries (Kenya and Uganda) could exchange trade favours in sugar, fruit juices and pharmaceuticals to end the persistent trade dispute between them.

“Uganda has approached us bilaterally to say you (Kenya) we have been allocated less, we are not contesting but why don’t’ you take slightly more. We are members of the Common market for East Africa and that is the basis upon which we are going to exchange favours. And for me I’m I will not just go there as part of Kenyan delegation, it is us (Kenya) who have issues actually. Most of our products are facing duties that are unreasonable or contestable. So we are going to exchange trade,” said Mr Weru.

“So we are saying that during that meeting we shall relax a bit of our sugar market in exchange of relation of our products that are facing the Non-Tariff Barriers (NTBs) in Uganda such as fruit juices. Those are the kind of things we are going to discuss on the part of Kenya.”

Kampala had disregarded a bilateral agreement signed with Nairobi in December 2019, as the Uganda Revenue Authority sought to raise a total of Ush20.21 trillion ($5.48 billion) in domestic taxes to finance part of the Ush45.49 trillion ($12.33 billion) budget for the 2020/2021 fiscal year.

In March 2020, Ugandan Finance minister, Matia Kasaija, tabled the Excise Duty (Amendment) Bill, which provided that fruit and vegetable juices (except juice made from at least 30 percent pulp from fruit and vegetables grown in Uganda) attract 12 percent tax or Ush250($0.06) per litre, whichever is higher. This is despite the two countries reaching a deal on the taxation of juices and pharmaceuticals and milk products in December 2019.

As part of the agreement that was signed in Kampala by Kenyan trade officials led by the then Principal Secretary in the Ministry of Trade, Chris Kiptoo and his Ugandan counterpart, Grace Choda, Uganda had committed to abolish the contentious taxes by June 30, 2020 and to provide an advance progress report on March 31, 2020.

In return, Kenya committed to lift the ban on exports of poultry products to Uganda that was imposed on February 14, 2019 and also to increase market access for Ugandan sugar to 90,000 metric tonnes from 30,000 metric tonnes, subject to verification by Kenya in February 2020. Kenya also lifted the long-standing ban on export of beef and beef products to Uganda. The two countries also agreed that Kenya imposes 16 percent VAT to control influx of Ugandan milk into the Kenyan market and protect local dairy farmers.