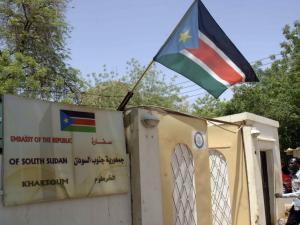 A Kenyan bank has blocked bank accounts used for remittance of salaries of South Sudan embassy officials in Nairobi after an alleged directives from the United States Department of State.

“The Standard Chartered Bank blocked the accounts used by the government to pay our salaries,” a South Sudan embassy source in Nairobi told the Nyamilepedia this morning.

The source also added that containers belonging to South Sudan Mombasa port representatives have been detained at Kilindiini Harbor after an apparent directives from the United States asking authorities in Kenya to not allow any good entering South Sudan via its port.

Wek Deng Marial, a South Sudanese insurance mogul and a director in ABMC, a company operating in Juba, Mombasa, Dar e Salaam has been given 48 hours to leave Seychelles