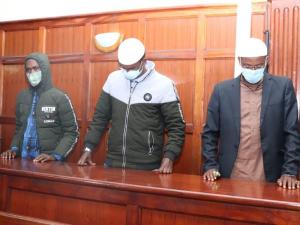 A Nairobi court has convicted Mohamed Ahmed and Hussein Hassan Mustafa for the offences of conspiracy to commit a terrorism act and being in possession of material promoting terrorism activity.

Nairobi chief magistrate Francis Andayi found that the two had actively participated in the Westgate Shopping Mall attack in September 2013, which led to the deaths of 67 people.

The third suspect, Liban Omar, was acquitted due to a lack of evidence.

The two convicts will be sentenced on October 22.

The September 2013 attack by the Somalia terrorist group Al-Shabaab left 67 people dead and many others injured after gunmen stormed into the mall and opened fire on shoppers.