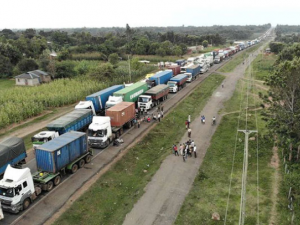 A union representing Kenyan long-distance truck drivers has said it suspended the movement of trucks to neighbouring Uganda Thursday until they are assured of their safety, citing Covid-19-related stigma and harassment.

Speaking at the union’s offices in Mlolongo, a town outside Nairobi, the association’s general-secretary Nicholas Mbugua spoke of unbearable humiliation drivers were subjected to in Uganda due to Covid-19 stigma.

Mr Mbugua said if drivers continue going to Uganda before the Covid-19 stalemate is resolved, it will create a deeper crisis and endanger the lives of Kenyan drivers.

He called for the suspension of all trips to Uganda until the government negotiates with Uganda, saying drivers are being coerced by Kenyan authorities to cross the Malaba border only for them to continue suffering.

“There is no safety agreement reached between the government and their Ugandan counterparts. Drivers are being coerced by police officers to cross over to Uganda. We demand our drivers’ safety,” said Mr Mbugua, who was accompanied by Cotu officials in a show of solidarity.

Truck drivers are reported to have been banned from accessing Ugandan eateries and lodgings. More than 800 trucks are said to cross the Busia border on a normal day.