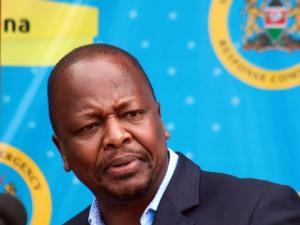 The number of Covid-19 cases in Kenya rose to 225 on Wednesday with the reporting of nine more positive cases of the disease.

Health Cabinet Secretary Mutahi Kagwe said 803 samples had been tested since Tuesday, when the ministry reported a total of 216 confirmed cases since the coronavirus was first reported in Kenya.

CS Kagwe said all the new patients were Kenyans and that five cases were reported in Nairobi and four in Mombasa.

He said 12 more people had been discharged from hospital raising the number of recoveries to 53.

He also reported one more death, raising the number to 10.

While noting that Kenya was not out of danger, CS Kagwe reiterated the need for the public to remain cautious and follow all of the government's directives for containing the spread of the virus.

He said the game changers in the fight against the virus remained mass testing, isolating and treating.

"The battle will be won not by the government but by Kenyans working together," he said.

Among the key steps the government has taken are a nationwide curfew from 5am to 7pm and the prohibition of movement into and out of Nairobi, Mombasa, Kilifi and Kwale counties, where majority of the cases were earlier reported.

The government also requires everybody to wear a mask while public, the risk being an arrest and charges. Those taken into custody could face a fine of up to Ksh20,000 ($200) or a prison term.

The health ministry earlier said mass testing would be a priority and would see about 12,000 testing kits distributed across the country.

It said priority areas would include quarantine centres, hotels, isolation facilities, hospitals and high population density areas such as Kibra in Nairobi, as well as parts of Mandera County in north-eastern and Siaya County in western Kenya.

In this regard, Mr Kagwe announced on Wednesday that a special team led by Dr Patrick Amoth, the acting Director-General in the Health ministry, had been sent to Siaya.

He said the team was examining the status of quarantine and isolation facilities in the county and engaging the people in moving in one direction against the virus.

CS Kagwe further said that personal protective equipment and other supplies had been sent to the county.

The coronavirus was first reported in Wuhan, China, on December 31, 2019.

Since then, it has quickly spread across the world and infected at least 2,014,009 people, according to Worldometer's tally on April 15.

Worldometer's count showed that the number of closed cases, either due to death or recovery, was 619,418.