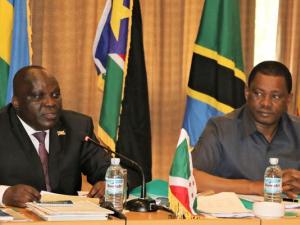 The speaker of Kenya’s National Assembly, Justin Muturi, has been handed over the Chairmanship of the Bureau of East African Community Speakers Forum.

He took over from Burundi’s Pascal Nyabenda Tuesday during the Forum’s 13th annual meeting in Uganda’s capital Kampala.

The position is rotational and the chairman serves for one year.

“I have to express my thanks and gratitude to this pleasant surprise and the honour that you have bestowed on me,” Mr Muturi said.

South Sudan’s National Assembly Speaker Anthony Lino Makana was expected to take over from Burundi, but he did not come for the meeting as he resigned from office last week.

South Sudan and Rwanda did not send delegations to Kampala for the meeting.

“We haven’t got an explanation as to why the delegation of Rwanda is not even at the [EALA] games. I have also noted that they were also not in Burundi and also they are not in the Cecafa games in Kampala,” she added.

The 10th East African Inter-Parliamentary games kicked off this week in Kampala, where national Parliaments from member states and the regional assembly (EALA) are competing in various sports activities including football, netball, volley ball and tug of war.

Ms Kadaga added that despite the absence of some members, those present should find solutions to the issues ailing the community.