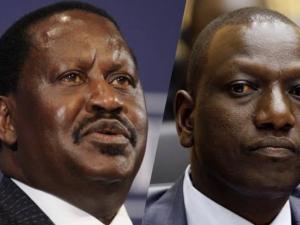 Kenya's Supreme Court on Tuesday said it had identified nine issues to determine the outcome of petitions challenging the result of the August 9 presidential election, including whether any irregularities were substantial enough to nullify the poll.

Deputy President William Ruto was declared the winner of the closely-contested race, scraping to victory by less than two percentage points against Raila Odinga, a 77-year-old veteran opposition figure now backed by the ruling party.
Odinga -- who lost his fifth bid for the presidency -- rejected the outcome and filed a petition at the top court alleging fraud in the vote tallying process.

On Tuesday, the court said it will attempt to answer nine questions during the case, including whether the election commission website was hacked and if there was any interference with the transmission of result forms.

The seven judges will also ascertain if the election technology -- a hot-button issue that led to the nullification of the August 2017 presidential vote following a challenge by Odinga -- met the "standards of integrity, verifiability, security and transparency".
After assessing the transparency of the poll, the court will finally rule on whether Ruto met the constitutional threshold of 50 percent plus 1 of the valid votes cast.

Since 2002, no presidential election in Kenya has gone uncontested, with this year's outcome also causing a rift within the Independent Electoral and Boundaries Commission (IEBC) which oversaw the poll.
Nine petitions were filed to challenge the outcome, but two were rejected on Monday.
Chief Justice Martha Koome said Tuesday the seven other cases will be collapsed into a single case because they cover the same issues.

Both Odinga and Ruto -- who has been named as a defendant in the case filed by the former prime minister -- have assembled huge legal teams.
Hearings will begin on Wednesday with a decision expected on September 5.

The Supreme Court is the highest in the land, created under Kenya's 2010 constitution "as the final arbiter and interpreter of the constitution".
Its rulings are final and binding. If judges order an annulment, a new vote must be held within 60 days.
But if the court upholds the results, Ruto will become Kenya's fifth president since independence from Britain in 1963, taking the reins of a country battling inflation, high unemployment and a crippling drought.

The IEBC was under heavy pressure to deliver a clean vote after facing sharp criticism over its handling of the August 2017 election.
The court annulled that election in a first for Africa and ordered a re-run which was boycotted by Odinga. Dozens of people died during a police crackdown on protests.

Kenya's worst electoral violence occurred after the 2007 vote, when more than 1,100 people died in politically motivated clashes involving rival tribes.
The court's announcement of the issues that it will examine is a common procedure in Kenya, known as a "pre-trial conference."
https://www.thecitizen.co.tz/tanzania/news/international/kenya-s-top-cou...