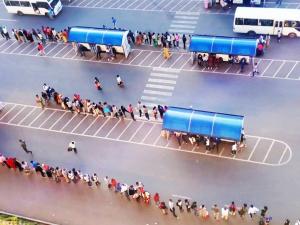 There is a need for over 500 buses to help end public transport woes in the City of Kigali, Emmanuel Katabarwa, the city engineer has disclosed.

Speaking on the national broadcaster on Sunday July 31, he said that from the existing fleet currently on the city roads, there is a deficit of 271 public buses.

“We are working with RURA, RTDA so that we can engage existing private transport operators to bring in more buses in the next few weeks because there might be buses that are lying idle or might not be used efficiently.

We are doing a census of all buses that might be available and use them appropriately,” he said.

In 2019, RURA issued a tender calling for investors to address public transport complaints in the second generation of transport system.

However, Katabarwa said the assessment showed that no investor proved to have enough financial capacity and all what had been requested to address the public transport issues.

He said the needed 500 buses in the capital should each one carry from between 39 and 70 passengers.

He said there is a need for a passenger information system.

“Today, someone might have missed a bus yet there is a bus that is parked somewhere in the bus terminal. The system could help operators know when there are passengers in routes and bus terminals to deploy buses,” he said.

Innocent Twahirwa, the Managing Director of Jali Transport Ltd that operates in two zones of the four public transport zones in the city said they are going to buy more 70 buses.

“We are on the same table to address transport issues. There should be more public buses depending on the demand. However, we also need dedicated bus lanes (on city roads) because at times buses are caught up in traffic jam which affects efficiency,” he said.

According to him, they haven't bought any new bus since 2019.

“We have now ordered for more 70 buses which could arrive in January next year. We already have 202 buses in our zones. The buses can help during peak times. Besides needed dedicated bus lanes, we also need a passenger information system for improved management, he said.

Fabrice Barisanga, the in charge of transport in the ministry of infrastructure said that 215 Km of roads are being constructed or upgraded to ease transport in the city besides increasing buses.

“RURA will soon announce the number of buses on the routes,” he said.

Deo Muvunyi, the Acting Director General of RURA said that the average time to wait for a bus is currently long as it is between 30 and one hour.

“There are few buses in addition to other factors that affect efficiency in public transport. We are working on the issue of shortage of buses,” he said.

Mérard Mpabwanamaguru, the vice mayor in charge of urbanization and infrastructure in the City of Kigali recently revealed that since 2013 when three public transport companies were selected to ply all Kigali routes, public buses have reduced to one third of the original fleet.

“Some are no longer roadworthy, others were withdrawn due to Covid-19 impact among others,” he said.