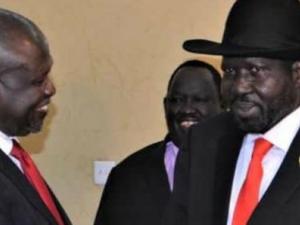 Puok Both Baluang, the SPLM-IO director of information and public relations told in an exclusive interview on Tuesday morning that the meeting initially scheduled for today has been adjourned to Thursday, November 7th at the request of the Ugandan authorities.

“The meeting has been adjourned to Thursday, November 7th at the request of the Ugandan government organizing it,” Baluang said.

He further disclosed that Machar would then travel from Kampala on Friday for Addis Ababa where he will take part in the meeting of the parties to the revitalized peace agreement in which the parties are expected to come up with a plan whether to form a government on November 12th.

“The Chairman will then travel from Kampala to Ethiopia for the meeting of the parties to the revitalized peace agreement,” the senior opposition official said.

If conducted as planned, the Kampala meeting would have brought together Machar and Kiir both of whom are on a loggerhead over the formation of what would be the Reconstituted Transitional Government of National Unity (R-TGoNU).

While Kiir wants the government formed on November 12th as agreed by the parties during a meeting in Addis Ababa last May, opposition groups including Machar’s SPLM-IO wants the action postponed to a later date.

They argues that all the outstanding issues provided for in the agreement such as the security arrangements (formation of a unified army, a unified police and a unified national security service), the number and boundaries of states must first be addressed.

This, Machar said, is to ensure a stable transition and to avoid a 2016 scenario in which a 2015 peace agreement collapsed following fighting at the presidential palace in Juba between Kiir’s guards and those belonging to Machar.