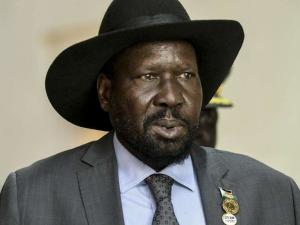 Since July, South Sudan’s President Salva Kiir has refused to formally nominate Riek Machar’s nominee for the governor of Upper Nile State, Johnson Olony, whom he considers a ‘’warmonger” and not suitable in the power-sharing arrangement.

President Kiir now wants Mr Machar, the first vice-president and the leader of the Sudan People’s Liberation Movement in Opposition (SPLM-IO), to write an undertaking to take responsibility should Gen Olony break the truce.

Speaking with church leaders from the All African Conference of Churches and World Council of Churches who had visited him to discuss the delay of implementation, President Kiir said that Gen Olony remains an “active soldier” who operates outside the territories that are controlled by SPLM-IO or by the government.

However, SPLM-IO has now threatened not to submit the names of its nominees for local government and other positions if Gen Olony is not appointed, which could further delay the implementation of the governance chapter of the September 2018 peace agreement.

Lam Jok, the SPLM-IO deputy representative to Kenya, said that this is President Kiir’s strategy to delay the agreement.

“The first vice-president already took an oath to protect the people of South Sudan, including those of Upper Nile. Making another undertaking changes nothing and makes no sense. Take a look at the security arrangements, judicial reforms, and all the chapters of the agreement. Nothing is implemented,” said Mr Jok.

Gen Olony is a former leader of the Shilluk Agwelek militia of Upper Nile who defected to SPLM-IO in 2015. He was later accused by both the government and international human rights organisations of for war atrocities targeting President Kiir’s Dinka community living in Upper Nile.

Gen Olony has a huge following among the Shilluk — who later joined Mr Machar’s movement after the war broke out in 2013 — who have been complaining of years of marginalisation despite Upper Nile having the most productive oilfields.