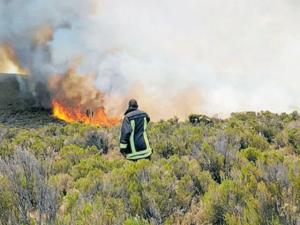 A Tanzania National Parks plane (Tanapa) which was carrying the security committee of the Kilimanjaro Region towards the Karanga-Baranko area where the fire is burning, failed to reach the scene due to the weather and heavy smoke that led to poor visibilty.

The head of Kilimanjaro Region, Nurdin Babu said that when they reached the area of ​​Mount Kilimanjaro, the plane circled more than twice to try to reach the area so they were forced to cut short the fact assessment mission.
"We have circled the area more than twice but we couldn’t reach the area of the inferno because there were heavy clouds and the smoke is huge, we decided to go back first and when the situation is calm then we will go back to check,” said Nurdin Babu

The fire which broke out on Friday night comes exactly two years after another broke out on Africa’s tallest mountain in October 2020.
Tanapa has since assembled more than 320 firefighters from its college, the fire brigade, police, rangers, employees and students of the wildlife management college (Mweka) and tourism company employees are in the area to curb the raging flames.
Preliminary findings are yet to establish the cause of the inferno that threatens climbers, however no human causalities has been suffered so far.

According to records at Tanzania National Parks Authority (Tanapa) show that the fire that erupted in October 2020 destroyed an estimated 95.5 square KM of vegetation on Africa’s highest peak.
The area that was destroyed by the wild fires then was equivalent to 5 per cent of the total area of the mountain which covers an area of 1,700 square Km.

In 2020 it took 10 days to put out the inferno.
https://www.thecitizen.co.tz/tanzania/news/national/kilimanjaro-fire-tan...