KQ orders all striking pilots to report back to work 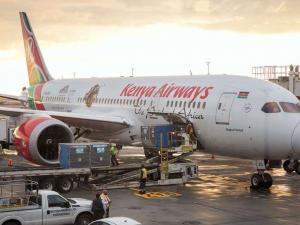 Terming the strike as unprotected, Mr Shivo advised all staff to get back to work saying that they were engaging and participating in an illegal industrial action.
Mr Shivo further said pilots who will not report on duty will have defied court orders, meaning they will be guilty of contempt.
“They will have disobeyed lawful orders issued by management and calls for disciplinary action which may result in dismissal,” Mr Shivo.

Kipchumba Murkomen seeks solutions to Kenya Airways pilots strike
“As advised through a staff memo sent out on 2nd November 2022, the Employment and Labour Relations Court at Nairobi on 31st October 2022, issued a court injunction against the strike notice. This made the industrial action unlawful, and all pilots were urged to observe their rosters and obey the court order.”
Owing to the strike, 53 flights were cancelled or delayed this resulting in major inconveniences to guests and the consequent losses.

On the other hand, the Transport Cabinet Secretary Kipchumba Murkomen termed the strike as illegal, a sabotage to the economy.

Kenya Airways boss disappointed by pilots strike notice
Murkomen said the government was willing to listen to the issues raised but when the strike was called off, the CS shared, “It’s unfair for pilots to try and test the new administration with the strike… we are hoping a decision will be reached as soon as possible… about 10,000 passengers have been affected so far.”
The pilots actualized their threat to down their tools on November 5, 2022, in a row on deferred salaries and pension contributions.

The Kenya Airline Pilots Association (Kalpa), which draws the bulk of its membership from Kenya Airways through their General Secretary Murithi Nyaga said, “We hoped that the management of the airline would soften its hard stance and engage in… negotiation on the issues raised. KQ management has not made any meaningful attempt to engage and have matters resolved.”
https://nairobinews.nation.africa/kq-orders-all-striking-pilots-to-repor...