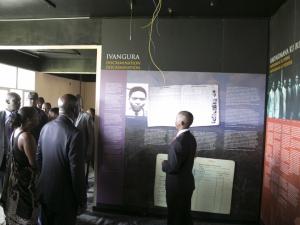 Some key people who participated in the killing of more than 50,000 Tutsi who had taken refuge in Murambi, 26 years ago, live unhindered in France, according to the National Commission for the Fight against Genocide (CNLG).

April 21, 1994 is the day thousands of Tutsis were murdered, in cold blood, at the onset of the Genocide against the Tutsi in the area.

A former technical school, Murambi is located in Nyamagabe District. Jean-Damascène Bizimana, the Executive Secretary of CNLG, told The New Times that most of the masterminds of the massacre died in DR Congo.

Others including Froduald Havugimana, a vice mayor in the area, and David Karangwa who was a registrar at the Nyamagabe Canton Tribunal (equivalent to the current primary court), are within the ranks of genocidal militia in eastern DR Congo up to now.

According to the Commission, other people who participated in the killing of more than 50,000 who had taken refuge at Murambi were Felicien Semakwavu, former Bourgmestre of the former Nyamagabe Commune.

Bizimana said that Semakwavu is also in the FDLR militia in DR Congo.

When the Genocide started around Murambi, the Tutsi from there and those from Mudasomwa, Kinyamakara, Musebeya, Muko and other communes started to seek refuge at Murambi.

According to CNLG, those who fled to Murambi were told by their authorities that they would be able to keep their security while they are together.

"But it was a lie because the former president of criminal government Sindikubwabo Theodore together with his Prime minister Jean Kambanda had visited Gikongoro and instructed people to start genocide," reads a CNLG document on the massacres.

Weakened by thirst before they could be killed

As noted, it was after this meeting that the authorities encouraged the Tutsi to flee to Murambi, lying to them that they would be safe there.

Those who had previously fled to various communal and church offices and those who were hidden by the Hutu were taken to Murambi by car or brought by others.

"Everywhere they passed on the way to Murambi, they were stoned by the Interahamwe. When they arrived in Murambi, Interahamwe started to cut off all water pipes supplying Murambi so that they would be weakened by thirst before they could be killed."

In the following days, as noted, interahamwe would attack them and the Tutsi fought back with stones and repelled the interahamwe.

But on the dawn of April 21, 1994, gendarmes started firing grenades and shooting on Tutsi refugees.

Interahamwe, CDR supporters and civilians carrying clubs, machetes, spears and axes circled and finished off those who were not killed with gunshots and the wounded.

Murambi was also the campsite of French military in the “Zone Turquoise” where they claimed to have come to protect the Tutsi who were being killed.

But, according to CNLG, "that did not happen because a few Tutsi who survived went to Murambi but were kidnapped and killed by the Interahamwe and the French soldiers did nothing about it."

"Some French soldiers raped Tutsi girls and women and committed various other crimes, according to a report by the Mucyo commission," it is noted.

At the end of their mission, French troops asked people who were in Murambi to cross over to DR Congo.

They assured them that they would help them return to Rwanda.

Today, the Murambi Genocide memorial is home to more than 50,000 Tutsi genocide victims who were killed there and those exhumed from Gasaka memorial.