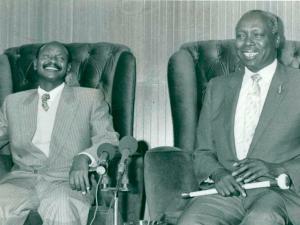 The former head of the Presidential Press Service in Kenya, Lee Njiru, gives a rare glimpse by an insider of happenings in the corridors of power and illustrates efforts made to advance Project Kenya in his book, “President’s Press Man”. This is an extract.

The death of Foreign Affairs Minister Robert Ouko in February 1990 shocked President Moi to the core. When the news of the death was made public, I was with Moi at Rumuruti State Lodge. We had spent the night there after a grueling tour of Mt Kenya region.

During the subsequent inquiry and rumours from various quarters, certain people, without any empirical evidence, accused President Moi of complicity in the murder. The President was terribly jolted by these allegations, especially the one that Ouko was dragged from Koru in Nyanza Province to State House, Nakuru, and then taken back to Koru where he was burnt.

Moi recalled that in 1961, when he was Kenya’s Parliamentary Secretary for Education, he attended a UNESCO Educational Conference in Addis Ababa, Ethiopia. “It was there that I first met Ouko, who was studying at Addis Ababa University. During our discussions, I realised that we were both members of the Africa Inland Church. Ouko struck me as a brilliant young man who could play an important role in nation building,” Moi told me.

Lee Njiru: Witchcraft and other rituals in State House

He narrated to me how he had assisted Ouko to rise in Kenya’s civil service and also in the East African Community. In 1988, Moi personally campaigned for Dr Robert Ouko, whose parliamentary seat was in danger of being taken away by the more popular and richer Job Omino.
“If, at any time, I felt that Ouko was not serving my interests, I could just relieve him of his Cabinet portfolio. I did so with higher people, like Mwai Kibaki and George Saitoti who were Vice Presidents,” he further told me.

The narrative that Ouko was killed at State House, Nakuru, was ridiculous, according to Moi.
“All State Houses are guarded by the GSU, comprising officers drawn from all the communities in Kenya,” Moi told me and wondered how such a high profile assassination could be carried out in such a place.
“Assassinations are highly secretive,” he said, and wondered who would be that stupid to drag Ouko from Koru, kill him in Nakuru and take back to Koru a body dripping with blood.

Secret deals
President Moi, in certain instances, had dealings with regional leaders, both official and otherwise, without the knowledge of the Ministry of Foreign Affairs. Many times Joshua Nyongolo Nkomo, a Zimbabwean revolutionary from Matabeleland and founder of the Zimbabwe African People’s Union (ZAPU), would pass through Nairobi and stay at Embassy Hotel on Tubman Road, off Koinange Street.
Somehow, Moi would know of Nkomo’s presence and his dire financial needs. He would then call me to his office and give me a bundle of American dollars and instruct me to take them to Joshua Nkomo secretly. Nkomo would then thank me in English and some broken Kiswahili.

Lee Njiru: How Moi settled on Uhuru as successor
Moi knew that Nkomo’s tribe, the Ndebele, was smaller than that of Robert Mugabe, another revolutionary who was Shona. But Moi believed that Nkomo had to be nurtured in case Mugabe was killed by the ruling white minority.

President Moi would also send me to take money to the leader of South African Pan African Congress, Mr Clarence Makwetu. Although the Pan African Congress was no match for Nelson Mandela’s African National Congress (ANC), Moi was suspicious that the South African racist Boer regime could kill Mandela in Robben Island where he had been imprisoned. In this case, Moi felt obliged to help in nurturing an alternative leadership. In any case, Makwetu had been a fearless revolutionary who had been imprisoned in various parts of the country for agitating for the emancipation of the black people in South Africa.

In early 1980s, President Moi introduced me to a tough Ugandan revolutionary, Yoweri Kaguta Museveni. By that time, this Ugandan rebel was going by the pseudonym ‘Mzee Kassam’. His young brother Caleb Akwandwanaho was using the fictitious name Salim Saleh.

President Moi told me to respect Museveni, whom he said was the future President of Uganda. When Museveni was leading a guerilla movement against the governments of Milton Obote and Tito Okello, my upstairs office in State House, Nairobi was many times his command post. It was here that he used to telephone and give instructions to Salim Saleh, who was one of the leaders of the National Resistance Army (NRA).

Whenever Museveni came to my office, I would ask him whether he needed tea. He would then remind me that he needed food.
“I’m a guerrilla and a guerrilla eats food whenever it is available,” he would say.
He reminded me that as a bush fighter he might be surrounded by an enemy and not have access to food for several days until he gets a corridor of escape.

During the 1985 Uganda peace talks in Nairobi, I was introduced to many leaders representing the NRA of Yoweri Museveni and the Uganda Government led by General Tito Okello. I forged friendship with many NRA luminaries such as Eriya Kategaya, Ruhakana Rugunda and Elly Tumwine. I also made friends with Olara Otunnu and Brig Gad Toko from the government side.

Lee Njiru: Day minister accused Mama Ngina of plotting to eliminate Moi
Eriya Kategaya rose to be First Deputy Prime Minister, Ruhakana Rugunda Prime Minister, and Elly Tumwine Army Commander.
In meetings, President Museveni used to point at me and tell Mzee Moi: “You have been with this man for a very long time!”

Moi would reply, “A long time indeed.”
One of these days I will look for a way to meet President Museveni and tell him that I am not ‘this man’. If he forgot my name because of the exigencies of duty, then I will remind him.

The other guerilla leader President Moi instructed me to assist was Dr John Garang de Mabior of the Sudanese People’s Liberation Movement/Army (SPLM/A). At the behest of Moi, I used to create a makeshift studio in my office in State House where Garang would make a televised address to his people back in Sudan. The Presidential Press, which I headed, did the filming, with strict instructions not to divulge the venue.

With the assistance of Generals Lazaro Sumbeiywo and Joseph Nkaissery, who doubled as External Intelligence supremos, I would fetch Garang from his Lavington residence and drive him to VoK studios for press conferences. He used to sit back left in my official Mercedes Benz. This car was fitted with black curtains so nobody could see my passenger.

At the press conference I would conspire with a journalist to ask questions which would raise Garang’s esteem. One time I organised with a white lady journalist to ask him: “Dr Garang, when you were studying for your PhD in Iowa State University in the United States of America, did you imagine that you would one day be the undisputed leader of the Sudanese People’s Liberation Movement?” The main reason for this question was to make people aware that even though Garang was a guerilla, he was also an academic giant.

Although President Moi had a soft spot for Garang and supported him and the SPLM/A, he once told me that he, Garang, might come to ruin sooner than later.
“I have told Garang to aim at being the leader of only Southern Sudan but he is so ambitious that he wants to be the President of the entire Sudan. The Arabs in the North will destroy him,” Moi said. When I asked Garang what he thought of Northern Sudan, he told me, “Brother Lee, there are more black people in the North than in the South. I must liberate them.”

At one time, Garang called one of his aides known as Dr Justin. He told him. “Justin, when I become the President of Sudan, I will be very busy with the Affairs of State. Make sure that Brother Lee is taken care of.” Unfortunately, Garang died in a helicopter crash on July 30, 2005 before he realised his dream.

My association with Dr Garang brought me into contact with many of his aides, such as Commander Pagan Amum and an intellectual, Cirino Hiteng. The latter became a bosom friend of mine. We would always meet in the evenings for drinks in Nairobi.

In a previous chapter, I wrote about how I was left in Dar-es-Salaam by a presidential jet and how this incident got me a promotion. Cirino had a similar incident, but his was a matter of life and death. When he was Garang’s personal assistant, he escaped death by a whisker. On 30th July, 2005, the day when Garang perished, Cirino had accompanied his boss to Uganda at the invitation of President Museveni. After the two leaders finished their meeting, Museveni offered his friend, Garang, a helicopter to take him to Southern Sudan.

Take a bus
While on board and before take-off, Garang remembered that he had some business he needed addressed in Nairobi. He then gave instructions to Cirino to disembark, take a bus to Nairobi and attend to the business. Cirino felt disappointed. But he had no alternative. He obeyed the orders of his boss.

Garang’s helicopter crashed in the hills of Southern Sudan. He perished alongside his aides. Cirino survived and always recounted that incident to me. I also shared with him some of the things I went through which, at first, seemed detrimental to me but later turned out to be extremely beneficial.

Secret missions were not always to foreign dignitaries, but to local politicians and other senior public servants as well. Mzee Moi would in many instances, send me to take money, in hundreds of thousands, to Joseph Mulu Mutisya, who was a Kamba political heavyweight. During the administrations of Jomo Kenyatta and Daniel arap Moi, Mulu Mutisya bestrode the Kamba political arena like a colossus.

He was illiterate but, nevertheless, had a great say regarding the appointments of senior public servants from Ukambani. During Jomo Kenyatta’s administration, a Kamba politician, Paul Ngei, formed a political party known as African People’s Party to rival KANU.

The government, to besmirch this new outfit, christened it Akamba People’s Party to give it a tribal tag. Mulu Mutisya, a grassroots politician and an expert in the Kamba language, was assisted to form a tribal organisation known as the New Akamba Union. He became the Chairman.

Mulu Mutisya’s brief from the government was to keep Ngei in check and to ensure that he did not poison the minds of the Akamba as far as their allegiance to Kenyatta and KANU was concerned. Mulu Mutisya was heavily funded by the Government. He was also heavily protected by the system. When Moi took over as President, Mulu Mutisya, using his legendary oratorical gift, made sure that the Kamba people overwhelmingly supported Moi.

Other people I was sent to give money were Japheth Ekidor, a Turkana politician, Stanley Nyaga, a former Runjenjes MP and Antony Oyier, a former PC. One day, President Moi gave me money for a mission which was somewhat hilarious. He called me to his office and gave me Ksh. 10,000. When I had pocketed it, he asked me whether I knew Joseph Nyagah, the Kenya Airways MD. I answered in the affirmative.
“Invite him for dinner in a nice hotel. And warn him to immediately stop his corrupt dealings otherwise I will sack him,” Moi told me.

I telephoned Nyagah as instructed. I gave him the message after we were through with dinner. I did not want him to lose appetite. Nyagah was shocked. All the same he told me to tell Moi that he had received the message and would accordingly comply with the requirement.
https://www.theeastafrican.co.ke/tea/news/east-africa/lee-njiru-moi-secr...