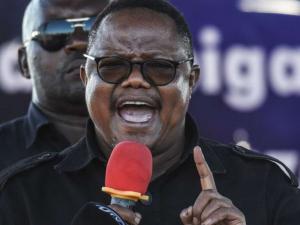 Tanzanian opposition leader Tundu Lissu has urged his supporters to turn out in large numbers to vote in the October 28 General Election.

He also pledged to protect investors in a bid to improve the business environment and boost economic growth.

“For us to win the election, you must vote on October 28. Don’t leave anyone behind, because our future is at stake,” Lissu told a rally at Lushoto.

In Tanga town, where the government is building a new port, President Magufuli pledged more jobs for the youth when the construction of the US$3.5 billion oil and gas pipeline with Uganda begins.

Both countries signed an agreement in September for the pipeline from Hoima in Uganda to Chongoleani in Tanga region. The project could create up to 10,000 direct jobs, the President said.

Dr Magufuli was accompanied by his Health minister, Ummy Mwalimu, who is seeking the Tanga Urban parliamentary seat. “In the last five years, Dr Magufuli reduced funerals in our homes through improved health services that cut deaths of mothers and children,” said Ms Mwalimu.

Mr Hamad said the party’s findings show that there were 448,533 eligible voters in Zanzibar, but the voter register contains 565,363 names. “ZEC has registered ghost voters to prop up the ruling party,” he claimed.

But ZEC’s Baraka Sunni dismissed the allegations, saying: “The enrollment of voters is done according to the Electoral Act (No 4 of 2018), which gives ZEC the mandate to establish the Permanent Voter Register. The law requires us to reopen the register on the 20th day after elections, and anyone has the right to view it.”