Machar calls for united front against corruption in South Sudan 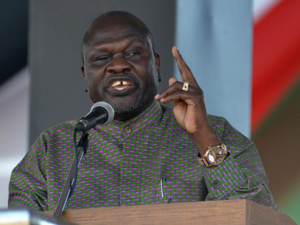 South Sudan’s First Vice President Riek Machar has issued a rallying call against corruption, which he says is the first stigma the country has to fight to redeem its image.

“He talked about the issue of corruption, calling it a stigma we must fight and especially in the area of procurement and this is very important,” Michael Makuei told journalists in Juba on Wednesday, referring to Dr Machar’s discussions at the extra-ordinary meeting of the Council of Ministers.

“He stressed that without fighting corruption, the people of South Sudan and the world will not trust on us unless we prove that to them. So, he appealed to all of us that we work together so that we can fight this stigma” said Makuei.

Besides insecurity, South Sudan has been ranked repeatedly by Transparency International as among the most corrupt countries in the world.

“The presidency and ministries should begin embarking on peace rallies, this rallies would send a message abroad that South Sudan has transit from a conflict country to a peaceful, which will attract investors.

“Secondly, the unity government should approach international investors. This can work well when it improves its public relations strategy,” said Kuol Nyuon.

Last year, Transparency International ranked South Sudan as the third most corrupt country in the word.

It attributed the reasons to weak democratic foundation, and the manipulation of undemocratic and populist politicians who use it to their advantage.

In addition, a report conducted by the Sentry— an advocacy and investigation organisation— last year showed top government officials as profiteers in the South Sudan conflict.

According to the report titled “Consequences for Kleptocrats”, South Sudan leaders and international individuals reaped billions of dollars from the county's civil war.

The Sentry urged the US to slap sanctions on the family members of South Sudanese elite and military leaders, blocking their access to luxury goods and real estate properties they own abroad, and boosting anti-money laundering efforts.