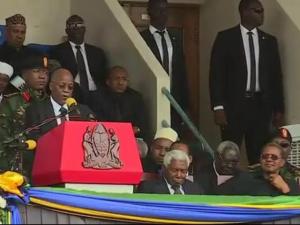 In a tearful tribute, Dr Magufuli renamed the 60,000-seater Uhuru Stadium after the late president who spearheaded its construction during his reign.

"Many of the successful projects that we see today were initiated by Mzee Mkapa ... and even the national vision to make the country a middle-income economy was established by him. We are grateful we were able to achieve this before the deadline (2025)," said President Magufuli.

He noted that while Mkapa, who died on Thursday night, July 23, did not want places named after him, he found it fit to rename it Benjamin William Mkapa Stadium.

“I know that had he been alive he wouldn’t have accepted this,” said the President, adding that he had also received petitions to rename the stadium after Mkapa.

Among dignitaries and diplomats who attended the farewell ceremony was Burundi’s Prime Minister Alain Guillaume Bunyoni.

The plane carrying the Kenyan delegation was forced to turn back to Nairobi mid-air due to bad weather in Dar, Tanzania Foreign Affairs minister Prof Palamagamba Kabudi announced.

The body of the retired head of State arrived at the stadium from the Mary Immaculate Catholic Parish church where a requiem was held.

Speaking during the mass, Father Charles Kitima, the Executive Secretary of the Tanzania Episcopal Conference, said Mkapa had instructed that his funeral service be conducted at the church where he prayed during his lifetime.

Mkapa, ruled the country as the third president from 1995 to 2005, has been lying in state at the stadium since Sunday, July 26, to allow Tanzanians to pay their last respects.

His family said he had been admitted for malaria treatment at a Dar es Salaam hospital and died of cardiac arrest, dispelling rumours spreading on social media that Mkapa had contracted coronavirus disease.

The president’s body was ferried in a military helicopter to his home village of Lupaso, Mtwara in southern Tanzania, where he will be laid to rest on Wednesday.