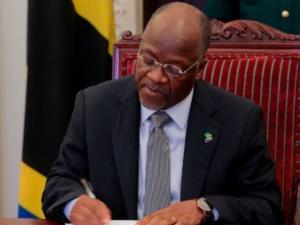 Dar es Salaam. President John Magufuli has on Wednesday, December 23 appointed Court of Appeal Judge Sivangilwa Sikalalilwa Mwangesi as the new Commissioner of the Secretariat for the Ethics of Public Officials.

“His appointment takes immediate effect and he will be sworn in tomorrow, December 24, 2020 at the Chamwino State House in Dodoma,” reads a statement in part.

Judge (rtd) Nsekela died on December 6, this year in Dodoma aged 76 after a short illness.

On December 8, 2020, President Magufuli led hundreds of mourners in bidding farewell to the body of Judge (rtd) Nsekela during a funeral function held at the Chinangali grounds in Dodoma.

His body was then flown to Mbeya Region for burial held on Thursday, December 10.

The new Ethics Secretariat Commissioner Judge Mwangesi took an oath in July 2009 before the fourth phase President Jakaya Kikwete to be the High Court Judge after serving for several years at the Kisutu Resident Magistrate’s Court as magistrate.

On December 23, 2016, Judge Mwangesi was sworn in by President Magufuli to become the Court of Appeal Judge, a day after his appointment.

It was during this event that the former Public Secretariats commissioner, the late Judge Nsekela took oath of office.