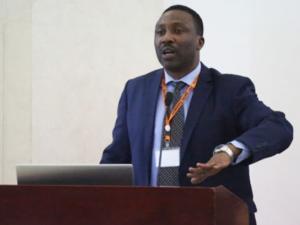 President John Magufuli has appointed Prof Shukrani Manya the new deputy minister for Minerals, replacing Mr Francis Ndulane who failed to accurately read out the Oath of Office when he was officially being sworn into the new position by the President at the Chamwino State house in Dodoma this week.

Prof Manya’s appointment comes after Dr Magufuli announced the decision in December 9 at the Dodoma State House shortly after swearing in 21 ministers and 21 of the 22 deputy ministers originally appointed.

The 22nd deputy minister, the Kilwa North MP Ndulane, was dropped from the final swearing and his ministerial appointment for failing to properly articulate the written oath even after three successive attempts to do so.

A press statement issued yesterday, December 11, by the director of Communications at the State House, Gerson Msigwa, stated that prior to his latest appointment as deputy Minerals minister, Prof Manya was the executive secretary of the Tanzania Mining Commission.

“The appointment of Prof Manya begins today, December 11, 2020, and he will be sworn in this afternoon at the State House, Chamwino in Dodoma Region,” the statement reads in part.

The fact that Mr Ndulane failed to coherently recite the Oath of Office prompted the Chief Secretary, Mr John Kijazi – who was presiding over the event – to direct Mr Ndulane to go get seated and relax.

If nothing else, this had all present puzzled, including President Magufuli himself.

But, the Head of State just as soon said he would look for someone who could properly read official documents.

In any case, the President – ever magnanimous – encouraged the Kilwa North MP to continue serving his political constituents in Parliament and outside it.

But, he also noted that the MP – who is apparently the holder of a Master’s degree in Science (Finance) –will needs to have his academic qualifications verified.

Sages down the ages have pontificated that ‘misfortunes never come singly.’

In an earlier incident, the newly-appointed deputy minister for Finance and Planning, Ms Mwanaidi Ali Khamis, had to make three attempts at reading out her Oath of Office before she got it right: third time lucky, sages also say.

At one time, she referred to the Union Cabinet as the (Zanzibar) Revolutionary Council!