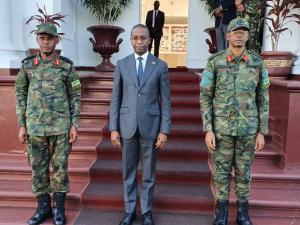 Major General Eugene Nkubito, who was promoted to the rank last week, is set to take over as the Joint Task Force of Rwandan security in Mozambique, replacing Maj. Gen Innocent Kabandana, who is completing his tour of duty.

According to Rwanda Defence Force (RDF), their discussions focused on the ongoing counter terrorism operations in Cabo Delgado Province.

Maj Gen Christovao Chume commended the achievements of the Rwandan Security Forces in collaboration with Mozambique Forces in fighting terrorism in Cabo Delgado.

President Paul Kagame, who is also the RDF Commander-in-Chief, on August 16, promoted Nkubito from the rank of Brigadier General to Major General, ahead of his posting to Mozambique.

Before that he was serving in the capacity of division Commander of RDF for Eastern Province and City of Kigali. In Mozambique, Maj. Gen Nkubito will lead efforts by the joint force to fight insurgents who are linked to Islamist groups.