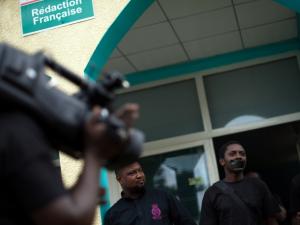 Press freedom advocates are coming down hard on Burundi, after increasing restrictions prompted the BBC to shut down its bureau in the central African country this week.

Burundian authorities have also suspended VOA from operating in the country since March and have threatened sanctions against Radio France International.

Reporters Without Borders wrote Wednesday that it is “extremely concerned about the fate of press freedom and pluralism in Burundi in the run-up to next year’s election.”

“How many independent media will be left when Burundi holds its presidential election in 2020?” the group asked.

Ernest Sagaga, the International Federation of Journalists’ head of human rights and safety, told VOA that the British broadcaster’s decision to close “the BBC has now realized shows that Burundi has no will to respect media freedom.”

Burundi’s government did not respond to calls from VOA for comment about the BBC decision.

BBC Africa editor Will Ross said Tuesday that the service would shutter its Bujumbura bureau “until further notice” after talks with government authorities to restore its operations in the country failed to reach a breakthrough.

On March 29, Burundi’s National Communication Council indefinitely suspended the BBC and Voice of America (VOA) from operating on its territory. The government also prohibited anyone from supplying any form of information to the two international broadcasters.

The media regulator initially had imposed a six-month suspension on both news agencies in May 2018. It also forbade journalists in the country from contributing to either the BBC or VOA.

The council imposed those restrictions following the BBC’s 2018 release of an investigative documentary, “Inside the Secret Killing House,“ which alleged the Burundi government’s involvement in torturing and killing opposition members. The media regulator said the story was false and damaging to the national image.

Burundi also has accused VOA of employing a journalist who opposes the government. It said in a March 29 statement that Patrick Nduwimana, the former director of Bonesha FM Radio in Burundi, is “wanted for participating in deadly violence that preceded the May [2015] attempted coup.”

In May 2019, a senior Burundi election official has called for independent media to be barred from covering the East African country's presidential polls in 2020, local press and witnesses reported Wednesday.

Jean Anastase Hicuburund, from the National Independent Electoral Commission, urged that official steps be taken to "block the way for those media who do not want to follow the path taken by the government."