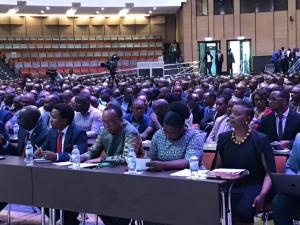 More than 800 medical doctors meeting at the Intare Conference Arena in Rusororo have said that increased investment in hospital facilities, training programmes and updating tariffs of medical services will improve healthcare services in Rwanda.

The medical doctors were deliberating on how to improve healthcare in the country.

Dr. Violette Akingeneye, the director-general of Kibuye Referral Hospital in the Western Province said on a panel discussion that while healthcare has improved in the country, there remains a number of challenges.

“For instance, our facilities are old and maintenance sometimes takes longer. It could take a year even when it’s a minor issue to fix,” she said, adding that facilities like hers don’t have enough ambulances.

The effects all that spillover to how services are delivered.

“We have outdated tariffs that date back to 2012. While we have, for instance, 80 per cent of the people who have universal coverage, 20 per cent still need to be financed. We end up taking on the burdens,” she noted.

According to Akingeneye, District hospitals pay about Rwf20 million to those who cannot cover their medical bills, something she said is a lot for hospitals that are still underfinanced.

Dr. Dominique-Savio Mugenzi, the representative of private medical practitioners, also argued that the current tariffs of medical products and services are not aligned with the time.

“The price of medical consumables have to be reviewed and updated,” he said without highlighting how much it costs hospitals to procure consumables.

The Ministry of Health and other stakeholders set standard prices for medical consumables, which many doctors think are outdated.

Doctors say pharmaceutical and other medical prices were rising on the market and, therefore, the prices charged on services in hospitals must be increased because it has been affecting service delivery.

Despite that, Mugenzi said private facilities have been increasing in the country. Today, there are about 73 private establishments across the country, eight of which are specialised clinics and eight others are polyclinics.

On the other hand, he said, more than 70 per cent of Kigali based patients go to private hospitals.

“That highlights the commitment of doctors to play a role in improving healthcare in the country,” he noted.

Still, he admitted that there has been “malpractices and fraud” in some private hospitals, which affects the reputation of private medical service providers and have an overall effect on services delivery.

Medical doctors also indicated that investing in improving the education of medical practitioners will help accelerate the level of services delivery and turn around the healthcare sector in Rwanda.

According to Dr. Jean-Claude Byiringiro, Dean of the Medical School at the University of Rwanda, schools like UR have been preparing students for medical careers.

The school presently has 14 medical programmes that train doctors, including one for general medicine and 13 for specialized doctors. That, he said, has contributed to raising the number of doctors in the country.

As of the end of September 2019, medical doctors were 1,464 physicians working in both private and public health facilities. These include 504 specialists, 751 general practitioners as well as 209 residents.

“However, we still have challenges such as fundamental physics labs being very few in addition to most of them not being equipped with advanced equipment,” he said.

Investing in educational, specialized training and skills development programmes could change that.

Dr. Claire Karekezi, a neurosurgeon, concurs with Byiringiro, saying that training programmes could enable the country produce more specialists in areas where the country still have to spend large sums of money to hire foreign specialists.

“We still need more specialists, especially surgeons because we lose a lot of money transferring patients abroad. We also need to improve our environment because if we bring in specialists and we don’t have the supporting environment, they will leave,” she said.

Specialized courses, she added, can change this.

President Kagame is expected to address the medics this afternoon.