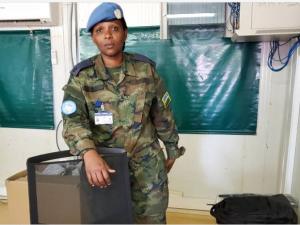 Today, May 29, Rwanda will join the rest of the world to mark the International Day of United Nations Peacekeepers at a time when the globe is still grappling with the New Coronavirus outbreak. This year’s focus is on the role of women in peacekeeping.

The United Nations Secretary-General António Guterres, who is leading activities to pay tribute to all the UN blue helmets who have lost their lives since 1948 and honouring those still in service says women contribute greatly to peacekeeping efforts and play a central role.

“Women often have greater access in the communities we serve, enabling us to improve the protection of civilians, promote human rights and enhance overall performance yet, women continue to represent only six per cent of uniformed military, police, justice and corrections personnel in field missions,” Guterres said.

Rwanda is among the leading countries with the highest number of female peacekeepers, both in the army and police, deployed on different peacekeeping missions around the world.

Though she was supposed to complete her one-year tour of duty in March, the COVID-19 outbreak meant that she had to stay in South Sudan much longer, until the opportunity to return home emerges -when it is possible to conduct rotations.

“I joined the army in 2002 and I have been able to serve on two different peacekeeping missions. All I can say is that women in uniform have the skills and knowledge to do whatever their male colleagues can do. We operate on the same front and in the same conditions,”

“However, I have observed that women peacekeepers give confidence and reassurances to the populations where we operate, especially women and children. They find us easily approachable and confide in us than they do with our male colleagues,” Maj Uwineza says.

She pointed out that culture varies from one country to another and in some like South Sudan or Sudan, women culturally don’t approach or feel free with men. In the communities they operate in, women and children find solace in female peacekeepers and are able to open up and share their experiences.

“They come to us and share with us their challenges. They easily talk to us if there is a case to investigate such as rape. This really gives us courage and inspires us to do more to support the troubled communities we serve. It makes us feel that we are making a difference,” Maj Uwineza told KT Press.

Out of the over 90, 000 thousand blue berets, women account for just 6 per cent. Maj Uwineza says there is a need to have more women and girls joining the armed forces, which can directly lead to an increase in the number of female peacekeepers.

“We need to encourage young girls to join security organs. There is nothing impossible for them to do. The training we get prepares us to face any kind of situation and operate in any environment,” Maj Uwineza says, debunking the myth that men are more advantaged to serve in the military.

The only challenge she faces is missing her family and children aged 10, 7 and 2, but well knowing the task at hand, she is able to brave the time spent on duty, with the promise of reuniting with her family soon, despite COVID-19 ensuring that she will wait a little longer.

“I am thankful to my husband. He is very supportive. When I am away, he takes care of everything especially the children. I am able to talk to them on a daily basis and know how they are doing,” she says, adding that she’s privileged and honoured to wear the country’s flag on a peacekeeping mission.

“It gives me pride to know that I am serving my country and making contribution towards restoring peace in an African country. 10 years or so from now I will look back and say I was part of the process,” she says.

Her sentiments are shared by Maj. Dinah Mutesi, currently serving in the United Nations Multidimensional Integrated Stabilization Mission (MINUSCA) in Central African Republic (CAR) who says that women play a vital role in peacekeeping due to their abilities to listen and understand people.

Maj. Mutesi, who has also served in Darfur under UNAMID, says that through experience and serving in different environments and cultural backgrounds has given her the right skills and capacity to deal with difficult situations.

“From my first experience in Darfur between 2010 and 2012 and my current mission in Central African Republic, I can confirm that women, like their male counterparts can adapt to different situations and environments,”

“Darfur was main hot and humid while CAR has tropical weather but I have thrived in all these environments without any problem. It goes to show that women like men have what it takes,” the 36-year old mother of two who was deployed in CAR in December 2019, says.

Maj. Mutesi, who joined RDF in 2003 says that women play a very important role in peacekeeping where they are seen as unifiers by all sides and play an important role taking care of the needs of the vulnerable, especially women and children.

“In all the places I have been to, I have realised that women peacekeepers are trusted by the societies. In Darfur for example, women would never express themselves before men. It took fellow women for them to open up,”

“When we visited women in camps or prisons, it would be amazing how they chose to trust us and talk to us about their experiences such as rape and we would talk to them and give them counselling. Even seeing us was enough to help deal with the trauma, we educated them and supported them in different ways,” Maj Mutesi said.

As mothers, Maj Mutesi says women in peacekeeping are better positioned to be catalysts of peace since they tend to be listened to and trusted by all sides.

The biggest challenge she says she has encountered are cultural differences their countries of deployment, where women are not forthcoming but through different initiatives, they are able to sensitise them and make a difference in the male-dominated societies they serve in.

Maj Mutesi said more girls need to be encouraged to join armed forces and eventually end up in peacekeeping to make a difference in the world.

“Girls need to know that being a soldier or police officer is a job like any other and a calling to serve the country, something they should be proud to do. The notion that joining the army is a difficult undertaking is old fashioned,”

“RDF has given women and girls equal opportunities. We are not side-lined because we are the ‘weaker sex’. We are able to do same tasks as men. I want to encourage young girls to see this as an opportunity not only to advance their careers but also to proudly serve their country,” Maj Mutesi said.

Being a mother of two has not stopped her from pursuing her dream. She says the conditions for girls to join the army are more favourable today than they were in the past but she and others have managed to rise through the ranks and are now representing their country on the continent.

She said Rwandan female peacekeepers have an outstanding record wherever they are and make a difference in the communities, the reason the United Nations continues to encourage more girls and women to go into peacekeeping.

Lt. Col Innocent Munyengango, the Military and Defence Spokesperson told KT Press that the RDF target is to exceed the 30 percent threshold enshrined in the Constitution of the Republic of Rwanda.

“Our gender policy originates from the national policy, which is in the constitution. Our target is to exceed the 30 percent threshold. Our recruitment policy encourages every gender to join. In UN peacekeeping, we are doing better than most countries,”

“We are always encouraged to deploy more women and we are doing that. Though RDF is an equal opportunity institution, we always encourage girls to join because the number has been small. Women are a significant part of our population and an important segment we need to tap into,” he said.

He pointed out that the feedback on Rwanda’s women peacekeepers has been always outstanding, many of them scooping medals and recognition during their tour of duty.

Rwanda currently has about 6,546 peacekeepers on duty in different UN peacekeeping missions. Lt. Col Munyengango said that currently all rotation exercises have been put on hold until the COVID-19 pandemic subsides.

The UN Secretary General said that the 95,000 civilian, police and military personnel currently deployed around the world, saying, “they are facing one of the greatest challenges ever: delivering on their peace and security mandates while helping countries to address the COVID-19 pandemic”.