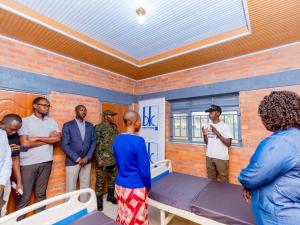 In several day schools, when girls are into menstrual period while at school, they have no choice but to report back home because there are no sanitary pads and other hygiene equipment that are required. They miss some lessons which affects them later on academically.

The government and its partners have been sparing no effort to change this by stocking sanitary pads, establishing a “girl’s safe room”, which is a sustainable program to keep all girls in classes.

Under this program, any girl who has unexpectedly started her period or any female with menstruation-related concerns can find safety in the girl’s safe room.
A room must be furnished with sanitary pads, towels, pain relievers, a bed, water, soap, and other amenities.

The construction of the girl’s safe room is being done from one school after the other. The idea is to make it universal in the country.
In the latest move, the Bank of Kigali, Rubis petroleum Company and ‘Our Past Initiative’ have partnered to construct a girl’s safe room at Ngeruka school−Bugesera district, Eastern Province.

Our Past Initiative is non-governmental organization that engage and activate Rwandan youth through social mobilization to assist vulnerable communities, tackle genocide ideologies and promote social inclusion.
“Our room was demolished, it wasn’t safe. They used to give us pads and asked us to return home,”Malaika Dushimimana, a student said.

According to Theophile Uwamukuza, the headteacher of Ngeruka school said that it is condition affects their school performance.
Uwamukuza pointed out that 238 students, 15 female teachers will benefit from the newly constructed girl’s safe room.

Christian Intwali, the Executive Director of Our Past Initiative said that 150 packets of sanitary pads were donated to the school and will be benefited by girls and residents neighboring the school.
He stated that an employee will be hired to take charge of the girl’s safe room and paid for six months.
“We shall continue to stock sanitary materials in the girl’s safe room for six months. We shall be using the funds worth Rwf 30 Million donated by our partners, Bank of Kigali and Rubis,” Intwali said.

On a national level, things are very different. Many female students who are unable to use these facilities end up skipping class to avoid being teased.
For instance, according to UNICEF figures, 1 out of every 4 girls misses school each month due to menstruation. A girl’s safe space will be required for all institutions, from primary to university, as part of a new draft law governing education in Rwanda that is currently being evaluated by parliament.

Yvette Imanishimwe, Vice-Mayor in Charge of Social Affairs said that at Ngeruka school, a girl’s safe room was built in less than 50 days, applauding the Bank of Kigali for the funds to support girl’s education.

In an interview with media about girl’s safe room, Dr. Valentine Uwamariya, Minister of Education said that all schools have been urged to have them, but regrettably, only secondary schools are adhering to this in large numbers. However, Primary schools and universities should also set aside that room.