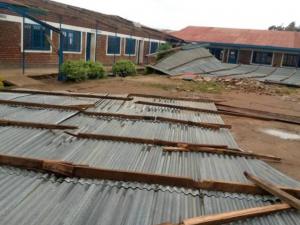 Rwanda Meteorology Agency has warned of strong winds predicted to gust across most parts of the country between September 11 and 20.

“Strong wind speed ranging between eight and 10 metres per second is expected over parts of Rutsiro, Karongi, Nyamasheke and Ngororero Districts,” reads the forecast.

“Impacts associated with strong winds such as blowing off of roof tops, falling of leaves and small branches, and damages caused by lightning are likely. Therefore, mitigation and prevention measures should be put in place,” the weatherman warned.

Rainfall ranging between 15 and 90 millimetres is expected across the country.

Cumulative rainfall ranging between 75 and 90 millimetres is the highest expected in 10 days over the north-western parts of Rubavu, Nyabihu, Musanze and Burera districts, while the remaining parts of the region including Rutsiro, Ngororero, Gakenke, Rulindo, Gicumbi and localized parts of Rusizi, Nyamasheke and Nyagatare are expected to receive rainfall ranging between 60 and 75 mm.

The predicted rainfall will also be characterized by thunderstorms according to the forecast.

Cumulative rainfall ranging between 15 and 30 mm is the lowest amount expected during the forecasted period and is expected over parts of Kayonza, Kirehe, Ngoma, Bugesera, Nyanza, Huye, Gisagara and western parts of Nyaruguru districts.

Over the last eight months, disasters claimed the lives of 137 people according to the ministry in charge of emergency management (MINEMA).

The report shows that 271 people were injured by disasters.

About 3,000 houses, 1,539 hectares of crops, 73 hectares of forests, two markets, 17 administrative offices, 261 classrooms, 60 sections of roads, 12 churches, and 52 bridges among other infrastructures were affected by disasters.

Floods, landslides, lightning, mine disasters, hail, rainstorms and windstorms are major disasters that could cause havoc.

According to the ministry, anti-erosion measures, planting trees among others should be embraced by farmers to avoid further damage.

Other measures include rainwater harvesting, relocation from high-risk zones, strengthening roofs and ceilings, conservation of wetlands and buffer zones for water bodies and drainage rehabilitation among others.