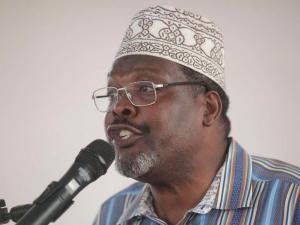 Lawyer Miguna Miguna has applauded President William Ruto for publicly stating that he has no plans of extending his presidency beyond the two terms stipulated in the Constitution.

President Ruto made the statement on Wednesday during a Kenya Kwanza parliamentary group meeting at State House, Nairobi.
“Do not spend your time pushing for selfish and self-serving legislation, like changing the Constitution to remove term limits. My focus is service to the people,” the president said.

President Ruto: I am not interested in extending my term of office
President Ruto was responding to the last week’s heated debate among politicians over Fafi MP Salah Yakub’s proposal to table a bill in parliament intended to scrap presidential term limits and capping it on age.

While reacting to the president’s remarks, Miguna tweeted “Well stated.”
But even before the head of state spoke, Yakub’s proposal had been roundly criticised by a cross-section of politicians from the president’s United Democratic Alliance (UDA), including party chairman Johnson Muthama who termed it as the MP’s personal remarks.

Ugandan opposition politician Robert Kyaluganyi aka Bobi Wine warned Kenyans to be vigilant against what he described as Musevenism.
“Dear Kenyans, be vigilant. Save your country from Musevenism. This may come off as a lone MP making a ridiculous suggestion, but this is how it starts. Exactly how Museveni began schemes to remove term and age limits. Defend your Constitution before it’s too weak to defend you!”
https://nairobinews.nation.africa/miguna-hails-ruto-for-rejecting-presid...