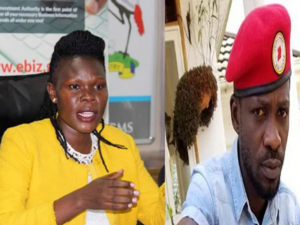 The Criminal Investigations Directorate (CID) has summoned presidential aspirant Robert Kyagulanyi, alias Bobi Wine, and the State Minister for Investment, Ms Evelyn Anite, over allegations that they held rallies in disregard to the presidential directives on coronavirus.

Bobi Wine is expected to appear at the CID next Tuesday while Ms Anite is supposed to report on Monday.

Mr Charles Twiine, the CID spokesman, on Thursday confirmed the summons, saying the duo is wanted for violating the presidential directives.

“We have written not to only the two people, but also others, and some have already reported and recorded statements before we released them on police bond,” Mr Twiine said.

Both were released on police bond.

The summons follow a video clip that circulated on social media showing Bobi Wine waving to people on Jinja Road when he went for a talk show in Jinja City last week.

Another one shows a group of people holding posters of Ms Anite in a procession in Koboko Town.

The CID said the rallies were illegal given the Ministry of Health guidelines on containment of the spread of Covid-19.In April, the government banned political meetings and rallies to contain the spread of the virus.

Mr Twiine said the summoned people are being investigated for doing acts that are likely to spread the disease.