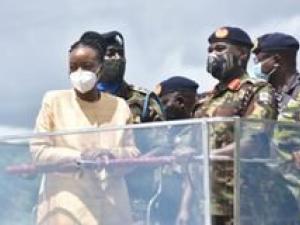 Defence Cabinet Secretary Monica Juma has praised the Kenya Defence Forces (KDF) officers deployed in Somalia, telling them that their sacrifices have made Kenya a respected member of the international community.

In a speech to commemorate KDF Day, celebrated on October 14 each year since 2011, Dr Juma told the soldiers their success on the battlefield each day is key to defeating the militant Al-Shabaab group.

“I urge you not to drop your guard because your success is key in restoring peace and stability in our neighbourhood, the region and the continent of Africa,” the CS said in a message.

The day is celebrated on October 14 of each year since 2011 when the KDF crossed into Somalia to secure Kenya’s international border against the terror posed by Al-Shabaab in what was known as Operation Linda Nchi.

The theme of this year's celebrations is Humanitarian Civil Assistance.

A year after Kenya’s entry into Somalia, KDF was re-hatted into Amisom and is now part of Amisom troops under a Ugandan commander.

In her message, the CS told the soldiers that their contribution to Amisom has been a game-changer.

“A safe and secure Somalia, able to provide security and secure its territory, translates into a peaceful East Africa and continent of Africa,” she said.

Since Kenya’s entry into Somalia, Al-Shabaab activities in Kenya have significantly reduced even though the militant group still poses a threat.

She, in particular, paid tribute to the soldiers for their ability to work in difficult environments, away from their families, pointing out that that symbolises their unwavering love for the country and Kenya’s duty of care for regional peace and stability.

“Your professional performance makes Kenya a respected country in the community of states,” the CS told the soldiers in a recorded speech.

She also paid tribute to the families of the soldiers, for allowing their sons and daughters to serve the country in Somalia.

On the basis of this year’s theme, the CS encouraged the soldiers to continue offering assistance to communities in Somalia where they are deployed anchored on the ideology of improving the wellbeing of people.

“We must continue offering medical support, water, training and construction of learning facilities and equip them,” she said.

She said the Ministry of Defence remains steadfast in its support of the soldiers and promised that it will continue to support KDF operations in Somalia.

“Go forth you daughters and sons of Kenya to defend and protect Kenya and its citizens,” she said.

“We shall continue to provide you with the requisite provisions to make your work easier and efficient. Thank you for selfless sacrifice to our motherland. Kenya is grateful to your loyal service.”