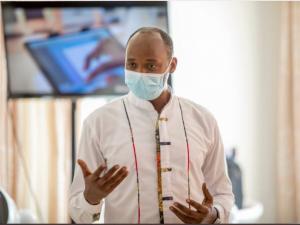 Rwanda currently has its highest number of patients in critical condition since the New Coronavirus outbreak in March, with more than 40 people currently being given oxygen in treatment centres, in what seems to be a more worrying situation.

This was revealed by the Director General of Rwanda Biomedical Centre (RBC), Dr Sabin Nsanzimana on Tuesday while appearing on RBA, pointing out that since November last year, more COVID-19 patients are ending up on assisted breathing and critical care than before.

Dr. Nsanzimana gave an insight into the process of treating COVID-19 patients in critical condition, pointing out that it takes the full attention of doctors and nurses for 24 hours to ensure that the patient gets proper care in order not to succumb to the virus.

The official said that health workers are increasingly using oxygen to treat patients, revealing that the team monitors the level of severity and administer oxygen based on the state of the patient, where some need more to stay alive, based on the condition of their lungs.

“There is a lot that goes into keeping a patient in critical condition alive. It is not just the oxygen. You have all these specialists in place, each playing their part to keep that person alive, which is why we recently transformed the newly completed Nyarugenge Hospital into the national COVID-19 care centre,”

“We are anticipating a situation where patients in critical conditional will continue to increase. Setting up the facility is part of the efforts to be one step ahead of COVID-19 because that is the only way to deal with it,” Dr. Nsanzimana said.

RBC attributed the increase in critically ill patients to people who keep the infection to themselves and report late when they are already in a bad condition as well as people who first assume that it is a normal cold they are battling.

He explained that ultra-modern Nyarugenge hospital, unlike Kanyinya COVID-19 treatment centre where they had to transport at least 150 oxygen cylinders daily, is fitted with a modern oxygen supply system in the walls, with just one tank behind, giving all the patients.

The medic revealed that during the festive days, regardless of efforts to limit the spread of the virus through toughened directives, COVID-19 prevalence increased and as a result, Rwanda, like many countries around the world, entered 2021 with heightened numbers of New Coronavirus, with daily cases above 100 in recent weeks.

Dr. Nsanzimana said that currently over 90 percent of the known active cases are under home-based care but there are cases where rules have been violated by some individuals, putting others at risk in doing so. Rwanda currently has 2,851 active cases of the 9,950 cases detected so far.

The RBC head said that they monitor patients under homebased care and it has been working well since it was started in September but recently, they have recorded cases where people under homebased care violate the rules, either by taking a stroll in the neighbourhood or going to buy something at the grocery.

“We have such cases and have worked closely with Police to deal with these cases because spreading COVID-19 intentionally is a criminal offence,” Dr. Nsanzimana said, adding that there is another category of people who learn that they have the virus and keep it to themselves and go on with their lives.

He said that despite the tagging measure, some patients violate the homebased guidelines by exploiting the loophole of not being confined in a hospital or isolation centre.

Dr. Nsanzimana also revealed that there are many people who have the virus but they are unknown because they have not been tested and these pose the real danger in transmitting it to other unsuspecting people.

“If you can’t safeguard yourself by violating the rules set for you, you have an obligation to safeguard others. Once it is determined that you intentionally flouted the homebased care rules or that you knew that you were positive and went ahead to hide it and continue to meet with other people, you are committing a criminal offence,” CP Kabera said.

The Police Spokesperson said that there is a situation where people fear fines more than they fear the virus itself, which has contributed to the spread, citing recent cases where they arrested people hosting secret parties in their homes or turned restaurants into bars.

He said in such cases, fines of up to Rwf250, 000 are imposed but still more people continue to go against government directives to curb the spread on COVID-19, calling for a mindset change where people see the New Coronavirus as a real danger to their lives.

Rwanda on Tuesday recorded 166 new cases, putting total cases since March at 9,950, with cases expected to cross the 10, 000 mark by Wednesday. A 55-year-old man in Kigali succumbed to the virus, taking the number of fatalities to 125.