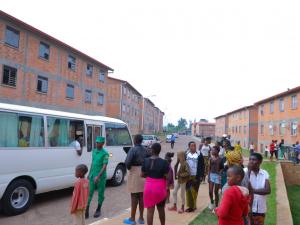 Some 12 families comprising 84 people from Kangondo and Kibiraro villages have relocated to Busanza model village in Kicukiro District after City authorities set a deadline for over 600 families to relocate before the upcoming rainy season.

The families, which moved in on Tuesday, September 13, are the third group to relocate to the newly built estate, which will house over 1,300 households.

Some 614 families, comprising 2,558 people have so far been relocated and city officials say the remaining over 600 families will have to move to Busanza by the end of this week.

The one-week deadline, city officials said, is being imposed because predicted heavy rains are likely to cause damage and casualties in the slums.

The Busanza apartments are valued Rwf14 million and Rwf19 million each, have between one and three bedrooms, with a living room, kitchen and bathroom.

The village made up of three-storey blocks has infrastructure such as roads, sports facilities as well as public water taps.

“This is a beautiful house,” Emmanuel Turimukaga said after getting the keys to his three-bedroom apartment. “It was built with durable materials and is located in a good place. Some people said the houses were indecent but I have seen first-hand that this is a decent house more than what I expected. I haven’t brought my belongings yet but I’ll be moving in tomorrow.”

The relocating families are facilitated by the city to move to their new homes.

Some of the residents who relocated in the previous phases said they welcomed their neighbours.

“After relocating, I have seen a notable difference between this village and my former residence. There are roads, electricity and there’s security. For me it’s the ideal place to live. And we have been delighted after seeing the ones we had left behind come to join us today,” said Seraphina Uwantege, who moved in about a year ago.

Authorities said the families who have not yet been to the village to consider a visit, which they say could change their mind.

“We are happy to receive the new residents, especially because some of them were reluctant,” said Anna Uwera, the Executive Secretary of Karama Cell where the village is located, said.

“Most of those we received today, who came to visit, said they had been told that the houses are in a swamp, for example. And they said they could have relocated earlier had they had true information.”

Uwera added that the families who moved in the previous phases have continued with their activities. “There’s a market, schools and health centres. They changed their places of residence but life goes on as usual,” she said.

“We encourage those who have been reluctant to relocate to come and at least visit the village and decide for themselves, because they have been lied to by people who have not even been here.”

Apart from evacuation from risky areas, the Kigali City authorities say the Kangondo and Kibiraro residents will have to move because the areas will be developed into modern apartments and other common interest activities.

According to the officials, grouped settlement units like the Busanza estate will be the model in a city with a fast growing population.