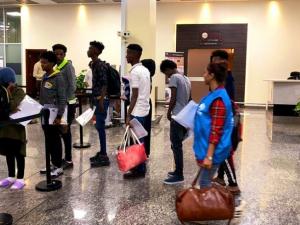 The second group of African asylum seekers from Libya is expected in the country, following the successful resettlement of the initial group of 66.

The initial group arrived in the country on September 26.

According to reliable sources, the refugees are expected as early as Thursday evening and are said to be over 100.

Their arrival will mean that Rwanda is closing in with fulfilling its pledge to receive 500 evacuees from the North African country as part of the efforts to rescue thousands that are languishing under gross human rights abuses in detention camps in Libya.

In a telephone interview with The New Times, Olivier Kayumba, the Permanent Secretary at the Ministry in charge of Emergency Management, said that the second group is “expected soon”, but he did not confirm the date.

Information released from the United Nations High Commission for Refugees (UNHCR) Libya last week showed that 45,653 refugees and asylum-seekers are currently registered with the agency in Libya.

According to reports, many people from across Africa have been left stranded in the northern African country after failed bid to reach Europe, and many have been subjected to human rights abuses including rape and slavery.

Rwanda first made the commitment to host refugees from Libya in 2017, and this year, the Government signed a Memorandum of Understanding with the African Union (AU) Commission and the United Nations High Commissioner for Refugees for the evacuation of some 500.

The first batch of 66 included vulnerable people among which were about 20 accompanied children.

The first group comprised of Sudanese, Somali or Eritrean nationals.

They are hosted at the Gashora emergency transit center under the framework of the Emergency Transit Mechanism upon arrival.

According to UNHCR, the asylum seekers have a number of settlement solutions, including integration into the local community, resettlement in a third country, or even being repatriated to their own home countries.

Thousands of people have been estimated to be held in dire conditions inside detention centres in Libya.

Many others are said to have died over the past few years while trying to cross the Mediterranean Sea to European countries in hope for better lives.

Human rights groups have documented multiple cases of rape, torture and other crimes at the detention facilities in Libya, some of which are run by militia groups.

Rwanda is home to over 150,000 refugees mainly from DR Congo and Burundi.