Mourners line up on Dodoma streets to bid Magufuli farewell 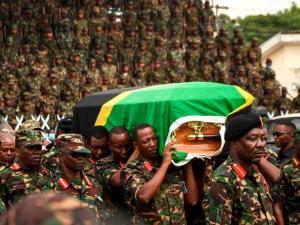 Most mourners in Tanzania’s capital city Dodoma paid their last respects to President John Magufuli lined up in the streets rather than at Jamhuri Stadium, due to the large number of people in attendance.

Dr Bilinith Mahenge, Dodoma’s Regional Commissioner, said in a statement on Monday, urged citizens to line up on the streets to prevent chaos as witnessed in Dar es Salaam on Sunday.

He added that lining up on the roads would give each citizen ample time to pay last respects in a more conducive environment.

“The turn up is too big for the stadium, hence citizens who wants to bid their final goodbyes will have to line up in streets when the carriage carrying the body will go around the streets of Dodoma,” his statement said.

Some people were allowed into the stadium on Monday, but most lined up on the streets as the hearse passed by. Those on the streets marched chanting 'jeshi' 'jeshi'.

On Sunday, when the body was in Dar es Salaam, thousands of people flocked the Uhuru Stadium to pay their last respects, causing chaos, while others breached the Julius Nyerere International Airport (JNIA) as they bid the president farewell.

Several people were seen collapsing, with unconfirmed reports of injuries.

When the body arrived in Dodoma on Sunday, a number of citizens lined up from the airport to Chamwino with others matched alongside the car carrying the casket.