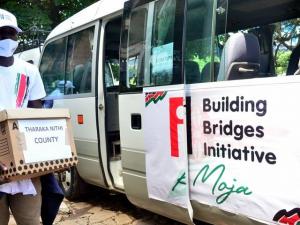 The Mt Kenya Members of County Assembly caucus yesterday urged the Independent Electoral and Boundaries Commission (IEBC) to increase wards from 1,450 to 1,650.

The caucus said the call is premised on the reality that constituency boundaries review has been hijacked by the Building Bridges Initiative report that recommends only an additional 70 wards.

Caucus chairman Charles Mwangi said that if the number of wards is reviewed upwards, the move will be beneficial to all in sharing power and resources.

“If the BBI report sails through and the National Treasury disburses the Ward Development Fund, we will not only devolve resources further down to the grassroots but also enhance representation in the devolved units at ward level. Some of the added wards will also benefit from the Equalisation Fund, hence more resources down to the common mwananchi,” he said in Maragua town.

Mr Mwangi said that giving ward boundaries priority in the review will give the country an opportunity to reorganise its devolved funds beneficiaries to reflect fairness.

“But we are aware of the political emotions that such reorganisation of boundaries elicits. As politicians, we should push for the common good and not selfish interests. If our common goal is to help Kenyans better their lives, we should adopt policies that help us to do so,” he said.

He said many politicians fear losing the villages where they are registered as voters whereas others push to have hostile villages axed from areas where they vie in order to improve their winning chances.

“These are the kinds of petty political differences that will never improve our administrative governance. We should, for once, be sober in this exercise and seek the much needed reorganisation of ward boundaries since Mt Kenya region stands to benefit a great deal owing to its high population density,” he said.