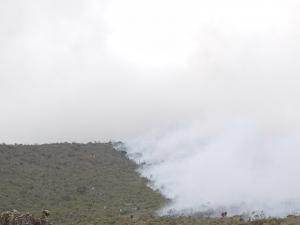 State Aviation Company has offered one of its helicopters that will fly over Mt Kilimanjaro to assess the area destroyed by fire and the other areas of the mountain that are still in danger of being ravaged by the inferno.

The fire that has entered its third day broke out on October11, at  Whona, which is a rest point by tourists using Mandara and Horombo routes to scale the highest mountain in Africa.

Speaking at a general briefing this afternoon, the senior assistant commissioner of the Tanzania National Parks Authority (Tanapa), Pascal Shelutete, said that the exercise of putting out the fire is led by Tanapa’s Commissioner, Dr Allan Kijazi, who doubles as the PS in the Ministry of Tourism and Natural Resources.

According to Shelutete the firestorm is being controlled in the vulnerable areas and that they continue to take all the necessary precautions so to ensure that the safety of visitors and their properties is critical.

Shelutete says about 500 people are at the scene trying to beat the fire and that the remaining areas that are still being ravaged the fires are the popular area of Mount Kifunika and the eastern area towards Rombo.