Museveni appeals for open market for Ugandan products in Tanzania 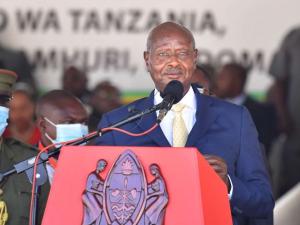 President Yoweri Museveni of Uganda has appealed to his counterpart John Magufuli of Tanzania to allow Ugandan milk, maize, sugar, bananas and manufactured goods to be sold in Tanzania because “the Ugandan market is not big enough” to absorb the country’s produce and products.

President Museveni was addressing the crowd at the swearing-in ceremony of President Magufuli on Thursday at the Jamhuri grounds in Dodoma. He said that Uganda’s last population census showed that only 32 per cent of the people were involved in commercial economic activity, and that majority were not working for prosperity but “for the stomach” (enough to feed themselves).

Now, more Ugandans are working for prosperity and producing more because they have “woken up” from their slumber.

The president added that the country will soon catch up with Tanzania, which recently attained middle income status.

President Museveni said Uganda was looking to the region, and Africa in general, to expand the market for its produce and products.

"You know we Ugandans were in a slumber a little, but now we are starting to wake up. So I am asking you to allow our sugar, industrial products, bananas, maize and so on because our market is not enough. We have to focus on the East African and Africa market," he said.

Uganda and Tanzania trade under the EAC Treaty, and there are rules and regulations that govern all products sold between countries, some under zero rates and others are charged taxes. Tanzania recently banned Kenya from exporting milk and other products to the country.

President Museveni and President Magufuli are jointly planning the construction of the region’s first oil pipeline from Hoima in Uganda to Tanga on the Tanzanian Coast.

On politics, President Museveni congratulated the ruling CCM party on winning the election, saying it was not easy for a candidate to take a leadership position in an African country with a party that does not have a good political orientation.

President Museveni said he followed the Tanzanian election closely through the country’s national broadcaster, and was aware of CCM’s political direction.

“I have never known the political direction of the opposition,” he said to a cheering crowd, in reference to the country’s opposition parties that have declared the election “a fraud”.

He recalled the politics of Kenya’s second president, Daniel arap Moi, who died in February. “The president of Kenya always reminded us of how to do politics by adopting ‘nyayo’ (footsteps), meaning he was walking in the footsteps of the founding father of Kenya Jomo Kenyatta.”

He said it was for this reason that he took to watching Tanzania’s TBC-1 television to see how CCM and President Magufuli were faring.

"Some think it is an easy thing, but for Africa to win it takes good political direction. Our independence leaders were divided, with others being puppets of foreign powers, but a few were steadfast pan-Africanists led by Mwalimu Julius Nyerere (Tanzania’s first president) and Kenneth Kaunda (Zambia first president) with Seretse Khama (Botswana former president),” said President Museveni.

The Ugandan president said that he has been a follower of Mwalimu Nyerere’s “nyayo” for 57 years, and has never regretted it. He advised President Magufuli and other leaders to adhere to the four pillars proposed by Mwalimu Nyerere to be good leaders.

“First, is the liberation of the whole of Africa, as an effort of pan-Africanism; second is the prosperity of the economy, and this comes from the production of goods and services; third is strategic security; and last is the protection of Africa and its brotherhood. We supporters of Mwalimu Nyerere from the past know these four things,” President Museveni said.