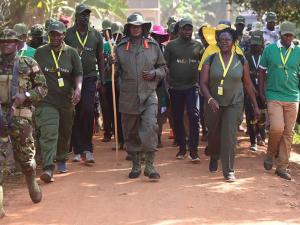 Uganda President Yoweri Museveni has justified his move to shut down Facebook in the country in a move that has attracted criticism from opposition leaders Kizza Besigye and Robert Kyagulanyi aka Bobi Wine.

President Museveni on December 23, 2022, asserted that Facebook would be fully reopened in the country if ‘they stop playing games’.
He also termed the social media firm’s management as ‘arrogant’.

Kuja polepole! Pressure mounts on Sakaja
But Besigye, Museveni’s former ally turned harshest critic, argues Ugandans need Facebook for business and networking.
“As Museveni brags about ‘closing’ Facebook in Uganda for two years now, Mark Zuckerberg’s Facebook revenue for 2021 grew to $117bn (from $86 of 2020); Uganda had a 2021 GDP (total values of everything produced in Uganda) of only $ 40bn!” explained Besigye.

“Uganda’s many businesses that used Facebook for advertising and promoting their businesses in various other ways have suffered from FB closure. Meanwhile, Uganda is borrowing from “money lenders” to survive and Mr. Museveni has just returned from the USA to beg for help!”

Bobi Wine on the other hand opined that President Museveni, 78, was detached from reality.
“How sad, that he thinks his closure of Facebook in Uganda actually hurts Facebook more than it hurts the country! He even thinks he chased Facebook out of Uganda…..the last I checked, even the Police make daily posts on Facebook.”

Facebook operations were suspended in Uganda in 2021 in the aftermath of the general elections. Since, Ugandans who wish to access the service have opted to use virtual networks.
https://nairobinews.nation.africa/museveni-blasts-arrogant-facebook-bobi...