Museveni embarks on final campaigns ahead of January 14 poll 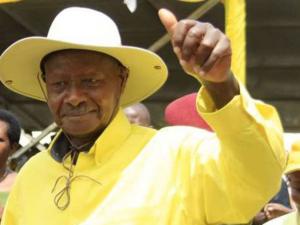 Uganda’s NRM presidential candidate Yoweri Museveni starts his final campaign leg Monday as he returns to some districts where he has already campaigned.

Mr Museveni, who is seeking to extend his rule to the fourth decade in the January 14, 2021 poll, said he will start his campaign by meeting the ruling NRM (National Resistance Movement) leaders in Kisoro District.

“Happy New Year to you all. We start the final leg of our campaign with a meeting of our NRM leaders in Kisoro District today. In the evening, I will conduct a radio/TV address translated in Luo for the benefit of Acholi and Lango sub-regions,” Mr Museveni, 76, tweeted Monday morning.

The NRM party Secretary-General Justine Kasule Lumumba said Sunday that Mr Museveni, who has been in power since 1986, will return to Kisoro, Kassanda, Yumbe and Maracha districts where he will be meeting several leaders as he winds up his campaigns.

Mr Museveni was due to campaign in districts like Mukono, Wakiso and Kampala which were blacklisted by the electoral commission over surging Covid-19 numbers.

However, Ms Lumumba told journalists Sunday that they are currently working with the electoral commission to grant them permission to have their candidate go back and campaign.