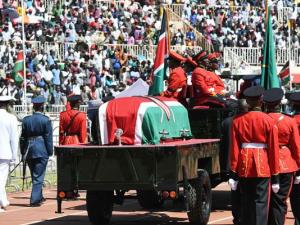 Several African heads of state and dignitaries attended the funeral service of Kenya's former president Daniel Moi on Tuesday in the capital Nairobi.

Among the dignitaries present include East African presidents Yoweri Museveni and Paul Kagame, and former presidents.

Kenya's Interior Ministry previously said that at least 10 Heads of State would attend the burial at Moi's Kabarak home in the Rift Valley on Wednesday, but officials remained tight-lipped about who would attend the memorial service.

Here are the VIPs confirmed to be in attendance at Nyayo stadium, Nairobi, for Moi's last salute: