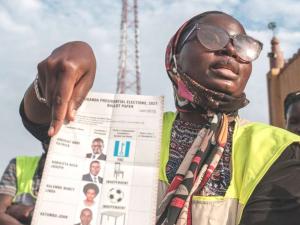 The opposition made a near clean sweep of strategic parliamentary seats, giving a psychological victory to the young politician.

On Saturday, the Electoral Commission chairman Simon Mugenyi Byabakama declared incumbent President Museveni the winner of the January 14 election with 58.64 per cent of the votes cast, while main opposition candidate Robert Kyagulanyi Ssentamu aka Bobi Wine was trailing with 34.83 per cent.

The 11 presidential candidates in the race started off with winning low votes since early results started trickling in early morning of January 15, and continued late in Friday, giving President Museveni, 76, a clear path to another five-year term in office.

However, focus now turns to the heavy losses the veteran leader has suffered in parliament, where the opposition — particularly Bobi Wine and his National Unity Platform — have punched above their weight and trounced long term ruling party lawmakers and senior Cabinet ministers.

o far, more than a dozen ministers have lost their seats, with many more legislators also still clinging on and fighting for their political lives.

The ruling party concedes that the Bobi Wine’s momentum has swept its legislators and ministers, especially those who hail from the central Buganda region, where NUP and other independent candidates have won parliamentary seats.

“It’s a wave and unfortunately we’ve lost a number of seats. There is nothing we can do about it,” says Emanuel Dombo, the director of information at the National Resistance Movement Secretariat.

Mr Dombo admits that more NRM heavyweights are likely to fall when all parliamentary races are called, and this would demand analysis and introspection and how to counter it in future elections.

“It looks like the voters wanted change in many areas in Buganda region where this wave happened, it also happens that the president didn’t do well there. I don’t know if it’s an issue of demographics or people just wanted change, but it’s a painful loss because these were ministers, and they are friends.”

Addressing a press conference at his home on Friday, January 15, Bobi Wine said the provisional results that the Electoral Commission was releasing for the presidential election were fraudulent, including pre-ticked ballot papers that were stuffed into ballot boxes.

“The people of Uganda will and must reject the blackmail. We’ve certainly won this election, and won it by far. I am very confident that we defeated the dictator,” he said.

But he saluted his party’s parliamentary candidates for winning their respective constituencies, describing this as “a statement” that the People Power wave was “sweeping away the dictator.”

Out of 11 seats for Kampala, NUP claimed nine, while in the Greater Luwero – which President Museveni describes as the cradle of the National Resistance Movement where he launched and fought the bush war that brought him to power – Bobi Wine’s party or NUP-leaning candidates won all seats in the region that holds sentimental and historical significance to the ruling party.

These NUP victories point at the young party – registered only six months ago – becoming the biggest opposition political party and taking the coveted position of the Leader of Opposition in the 11th Parliament, to form a shadow government to initiate and provide alternative policy to the party in power.

“I think this raises Bobi Wine to a new position, and if he can take it and be a statesman to propose policy alternatives, that gives his party a good start to challenge [the incumbent] and lead in future,” says Daniel Ruhweza, lecturer of constitutional law at Makerere University.