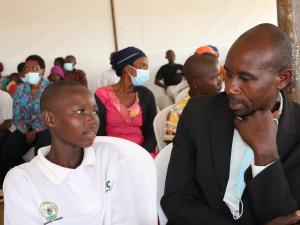 The National Rehabilitation Service (NRS) has warned to stringent measures against parents who are irresponsible in raising their children, an aspect that has contributed to increasing numbers of delinquents.

The highest factors of delinquency in Rwanda include poverty, domestic conflicts, illiteracy, peer pressure, drug abuse, and unemployment.
This has seen most of the delinquents escaping from homes and subscribing to criminal activities and idleness which has resulted into arrests.
Currently there are three government centres- Iwawa, Nyamagabe and Gitagata, working alongside 14 private rehabilitation centres.

Fred Mufulukye, the NRS Director General said that they have spent time educating communities- which will continue, but the next level will be to take punitive measures.
“Parents should reflect hard and start being responsible for their children otherwise we will be forced to evoke some laws (family law) to implement punitive measures for negligence,” said Fred Mufulukye, the NRS Director General.
Mufulukye stated that this will be implemented with success because the laws are existent and provide punitive options for parents who for example don’t educate their children, intentionally send children to beg on streets or neglect responsibility of raising children.
Mufulukye made the remarks on August 19, 2022 following concerns raised by children and adults delinquents currently being rehabilitated at Gitagata Rehabilitation centre in Bugesera district.

In 2021, NRS in collaboration with the National Child Development Agency (NCD) launched a campaign aimed at advocating for other measures to tackle the problem of street children, following government concerns on increasing numbers especially in Kigali city.
However there are still many youth and children under rehabilitation each year, reaching over 5,000 in all government centres despite efforts to focus on family life as the basis for the country’s development.

For example, most of the youth under rehabilitation at Gitagata (with 325 persons- including 143 boys, 35 girls and 147 women) are largely picked from Kigali City.
They said that they left their homes due to parents negligence, abuse and harassment.
Under such circumstances, NRS reports indicate that some parents claim that their children are unruly or unmanageable at home, thus deserve to be kept at rehab centres.

Changing Lives
During the parent’s visiting day at Gitagata centre, this August 19, parents were able to reunite with their children, some after two years. Some even shed tears after seeing how children have been transformed.

At the centre, the youth get six months of rehabilitation and six month training in life skills including catering, hair dressing and tailoring.
“I lost contact with my son two years ago but I am here to beg him for a pardon in public because it is my fault as a parent,” said one parent who thanked the government for transforming the lives of children.
26 year old Fiona Umutoni* was arrested and detained among sex hawkers in Kigali and is remaining with three months to complete her training as a chef.

Umutoni and other 10 ladies showed the skills she got from the center in bakery and she swore never to return on the streets.
“If we can get funding to start a baking business, we would put these skills into practice and earn a living,” Umutoni said.

The trainees shared a general concern of startup capital once they return in the community.
The Vice Mayors Social Affairs of Ngororero, Rutsiro district and Kigali city told KT Press that each of the cases will be screened and dealt with at the district level to find a suitable solutions.
https://www.ktpress.rw/2022/08/national-rehab-service-to-evoke-punitive-...