NCCR distances itself from its presidential candidate 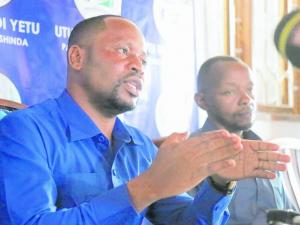 The National Convention for Construction and Reform (NCCR) party has distanced itself from a stand of its presidential candidate in the October 28 General Election who seconded the announcement of John Magufuli as the winner of the contest, stressing  it was his own sentiment.

The NCCR’s flag bearer, Mr Jeremiah Maganja, is among the nine out of 15 presidential candidates in the just concluded elections, who conceded  defeat to  CCM’s candidate Dr Magufuli, saying that they are ready to support him in his country’s development agendas.

However,  two major opposition parties Chadema and ACT-Wazalendo have opposed the results and called for a frsh General Election. Reading the joint statement before various media outlets in Dar es Salaam on behalf of his fellow leaders, Chademachairman Freeman Mbowe said they wanted a new General Election to be held as soon as possible.

“In our unity, we believe that what happened on October 28has no merit or legitimacy to be called a General Election, but it is the usurpation and looting of Tanzanians’ right to elect their leaders through democratic means,” he said. Mr Mbowe, who also unsuccessful contested the Hai constituency, said they wanted the disbandment of the National Electoral Commission (NEC) and the Zanzibar Electoral Commission (ZEC), which allegedly have been serving the interests of the ruling party.

The Civil United Front (CUF) echoed similar sentiments, saying in absence of efforts to create an independent electoral commission and the new constitution, the party will not take part in any other future elections.

The party’s national chairman Prof Ibrahim Lipumba said in Dar es Salaam on Monday that CUF was against the outcomes of the 2020 General Election, noting that the results  reflect the fact that NEC and ZEC still had a long way to go to becoming independent institutions.

And, speaking to a press conference yesterday, NCCR’s head of party’s ideology and public relation department  Edward Julius said the party does not accept the electoral results because they are invalid .

“It was a personal perspective, not the party’s stand. The party’s general meeting has does not recognise  the results ,” he noted.