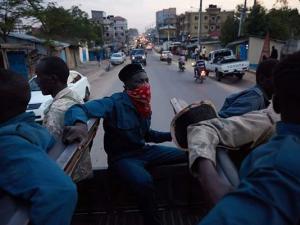 South Sudan’s new violence this week could threaten a precarious peace agreement between the government and rebel groups that have yet to sign on a unity deal.

The National Salvation Front, in a statement, accused SPLA-IO and SSPDF of attacking its military bases in Katigiri and Wonduruba Payam of Yei River County, Central Equatoria State.

“[Our] forces fought back in self-defence and dispersed the attacking enemy force which lost four soldiers,” the group said of the incident on May 5.

“Again on May 6, 2020, at 5: 00am, the SSPDF and SPLA-IO forces supported by armoured personnel carriers and heavy [weapon] mounted attack vehicles attacked [our] advance base in the outskirt of Loka. [We] responded to the attack and destroyed 1 Toyota land cruiser.”

The armed group described the attack as a "military campaign by the Revitalised government of national unity to exploit the global lock-down due to the Covid-19 pandemic" to attack its positions.

The Front is among several groups that did not sign on the peace deal known as the Revitalised Agreement on the Resolution of the Conflict in South Sudan (R-ARCSS), a 2018 pact that brought together several factions in South Sudan.

That pact was finally implemented from February as President Salva Kiir, his erstwhile arch-rival Riek Machar and other groups formed a unity government.

However, the group, as others, indicated their willingness to sign if certain conditions are met. That declaration is known as the Rome Declaration, having been reached in Italy and involved cessation of violence to allow more discussions.

When the violence erupted this week, prominent South Sudanese civil society activist cautioned the Rome Declaration on cessation of hostilities may be ignored.

Mr Edmund Yakani, the Executive Director for Community Empowerment for Progress Organisation said the clashes between the government forces and armed opposition groups in Yei County, Central Equatoria State are a violation to the Rome declaration.

“The ongoing military confrontations between the forces being it to IO, SSPDF and NAS around areas of Yei, Lainya or Morobo are really a contradiction to the Rome Declaration,” he told The EastAfrican.

“We condemn in strongest terms those military confrontations and call on the parties to cease hostilities and reconsider implementing the Cessation of Hostilities Agreement,” added Yakani.

Mr Batali Oliver, a community leader in Kupera Payam of Yei County, accused the SPLA-IO, under Dr Riek Machar of forceful displacement of civil population who had just returned from refugee camps in Uganda.

“Forces loyal to Dr Riek Machar came to our Village of Wuji payam [in the former Kupera County], looking for Gen Thomas Cirilo’s army. They didn’t get them but they started beating the local people, including children and the elderly and looted,” he said.

“Those displaced are facing a lot of difficulties, because they lost all their belongings. Almost all of them don’t have shelter, food and clean water.”

The SPLA-IO military spokesman Col Lam Paul Gabriel confirmed the clashes between them and opposition forces but denied allegations of forceful displacement of local population. He said they were acting in self-defence after being attacked.

“I will not be as dismissive to say the allegation is fake, but I will check whether the incident happened with our military commanders on ground”.