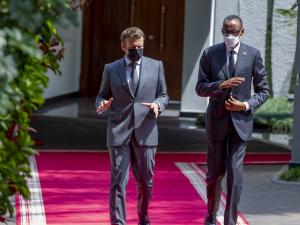 The newly restored ties between Rwanda and France are built on truth, Presidents Emmanuel Macron and Paul Kagame have said.

The Heads of States were speaking at a joint news conference at Village Urugwiro on Thursday during the two-day visit by the French leader.

The leaders said that the commencement of new ties and relationships is a result of courage and truth in the history of the two countries.

Speaking at the presser, President Kagame said that the visit was a moment to speak to the present and to the future, while reflecting on the past noting that the day was a culmination of a truthful review of history between the two countries.

“The truth heals. This is the principle upon which Rwanda’s entire project of national unity and reconciliation is based. That has been our experience as Rwandans. There is no shortcut. Our conviction, from the beginning, was that the process of reckoning with the role of France had to follow the same logic. And in any case, we knew it could not be harder than reconciling with ourselves,” he said.

In the search for truth, Kagame said that the weight of responsibility has been put back where it belongs: with those who made the decisions during the 1994 Genocide against the Tutsi.

The process involved the commissioning of an inquiry by the French President in 2019 which saw French historian Vincent Duclert probe the role of France in the 1994 Genocide in which over a million people were killed.

This report showed a clear role of France in Rwanda in the period between 1990 and 1994 and especially shows the role of French leaders in 1994 during the Genocide against the Tutsi.

Kagame lauded Macron for his apology to Genocide victims during his remarks at the Kigali Genocide Memorial adding that it was something more valuable than an apology, the truth.

“Speaking the truth is risky. But you do it because it is right, even when it costs you something, even when it is unpopular. Despite some loud noises and voices, President Macron took this step. Politically and morally, this was an act of tremendous courage. These risks paid off because there was good faith on both sides,” he said.

The new ties, Kagame said also recognize the need for developed and developing countries to come together to fights social ills such as racism and genocide ideology in a concerted and consistent approach.

This is a shift from an alternative mindset that thrives on assumptions that Africa is always down and automatically associates every success on the continent with some huge cost in terms of fundamental values and freedoms.

President Macron said that since 2017, the two countries have, despite the historical challenges that existed, worked together to revive bilateral ties, adding that significant progress has since been made.

Going forward he committed that France will accelerate the efforts to bring to justice fugitives responsible for the Genocide against the Tutsi who have found safe haven in France. Over 40 fugitives are known to reside in the European Union.

Macron also said that the cooperation will also involve regional initiatives in aspects such as investment and financing of African economies.

The countries also signed two bilateral agreements which were termed by both leaders as a new dawn in the relationship between the two countries in the process of resumption of ties.

The pacts include a framework for bilateral cooperation and an agreement for sports and talent development which saw Rwanda receive €1.5 million (about Rwf1.5 billion) for sport and talent development. The French President also availed 100,000 doses Covid-19 vaccines to Rwanda which were delivered on his arrival.