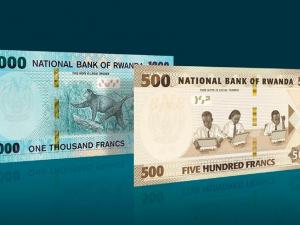 The Central Bank has announced that the newly printed Rwf500 and Rwf1000 notes that were printed will be out on the market next week.

This follows a Presidential Order issuing new banknotes as legal tender in January.

The new notes will cost the Government Rwf1.6 billion annually for the next three years bringing the total to about Rwf5 billion, according to National Bank of Rwanda Governor John Rwangombwa.

During the adoption and consequent rollout of a new currency, the central bank plans for three year cycles.

The procedure was subjected to a tender process whereby a Germany firm G+D Group was selected.

“We selected G+D Group, a company from Germany, to make the new notes. Both of those two new notes will cost us a total of about Rwf5 billion for the next three years,” he said.

The governor explained reasons behind the change of the two notes, including current similarities between the Rwf1000 and Rwf500 notes, which often makes them hard to distinguish from each other.

The quality of the notes was somewhat inferior leading to wearing out easily, he said.

The notes have improved security features to avoid instances of counterfeiting, Rwangombwa added.

“The Rwf500 and Rwf1000 bank  notes had significant similarities, including the colour. Considering the similarities and their quality we preferred to change them. We wanted to make other notes because they were wearing fast since they were issued in 2013,” he explained.

The new Rwf500 note is brown in colour from the current blue and will bear an image of the Nyungwe canopy walk. The current note bears an image of four children using laptops while the new note will feature three children.

While the Rwf1,000 will remain with the same colour (blue), it will feature an Intore dancer.

Both current and new notes will continue to circulate together until the end of 3 years when Central Bank will be done with the cost of the new notes. This time, they will issue a monetization notice.