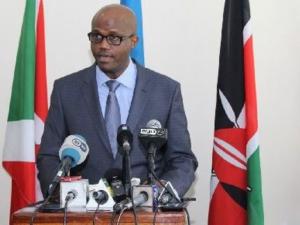 The East African Legislative Assembly (EALA) members of parliament have suspended all debate on the 2020/21 annual budget, demanding payment of their allowances in arrears since March.

The unpaid allowances have accumulated to $2.5 million, reflecting the cash crunch facing the regional trade bloc.

“At its meeting on September 14, the Committee resolved to suspend the consideration of the Budget estimates until payment of all arrears owed to the members and staff for activities undertaken between the months of March-June 2020,” reads the letter by Mr Namara.

The EALA MPs also want to be paid for all the sittings they have undertaken after June, which marked the beginning of the current financial year.

This includes a virtual sitting held on September 2, that approved a Vote-on-Account of $19.6 million to support normal operations and cater to expenses of the EAC in the first quarter of the Financial Year 2020/2021.

The government of Tanzania, in a letter seen by The EastAfrican, has rejected a request from the Council of Ministers to borrow $2.1 million to pay part of the MPs' outstanding sitting allowances, further worsening the financial crisis at the East African Community (EAC) Secretariat.

Most organs of the EAC are in paralysis with employees owed millions of dollars in salary arrears, following a delay of the annual budget that is supposed to have authorised withdrawal of funds.

The EALA speaker had on August 20 written to the EAC Secretary General, Liberat Mfumukeko, requesting the Secretariat to borrow $2.1 million from the Reserve Account to settle EALA sitting allowances as approved by the Council’s meeting held on August 4.

“This is to request $1.6 million from the EAC General Reserve Account and funds received by the Inter-University Council for East Africa (IUCEA) and Lake Victoria Fisheries Organisation (LVFO) to settle the outstanding balance of allowance arrears to members,” wrote Mr Ngoga.

The Speaker based his request on a decision made by the Council of Ministers in its meeting held on August 4, in which it directed that EALA Clerk to borrow and settle $2.1 million to EALA members.

“The meeting was further informed that following the disbursement by the Republic of Burundi on July 30, EALA would receive $589,473. The request to borrow $82,015 to pay salaries for June was also approved. Thus, the shortfall on the requested funds by EALA is $2,129,447,” said Vincent Biruta, Rwanda’s Minister for Foreign Affairs and International Co-operation, who is also chairperson of the EAC Council of Ministers.

The Council directed the Clerk to settle the amount from the Partner States disbursement and record it as a liability until the funds are remitted in full.

“The Council directed the office of the Clerk to record eligible expenditure from the amount of $2.1 million as a liability and settle it as Partner States disburse their outstanding contributions for the 2019/2020 financial year and directed Organs and Institutions of the Community to only convene their activities for which they have funds on account,” said Dr Biruta in the Ministerial report dated August 4 and copied to all EAC Partner States.

On September 9, in line with the Council directive, the Council chairperson wrote to Speaker Ngoga directing the Clerk to pay the amount to EALA members.

“I wish to inform you that after consultation with the members of the Council as per regulation 32 (2) of the EAC Financial Rules and regulations (2012), I hereby authorise the borrowing of $1,519,301 and $165,336 from IUCEA and LVFO respectively for the stated purpose (payment of outstanding balance of arrears to EALA members) and request to refund such amount once liquidity challenge improves,” said Dr Biruta in letter to Mr Mfumukeko.

“We are in receipt of a copy of a letter sent to you by the chairperson of the EAC Council of Ministers regarding the above subject matter,” wrote Brig-Gen Wilbert Ibuge, Permanent Secretary, Ministry of Foreign Affairs and International Co-operation.

“With regret, I wish to inform you that the United Republic of Tanzania was not consulted as mentioned in the afore-referenced letter and in that respect has not consented to the borrowing of $1.5 million and $165,339 from IUCEA and LVFO, respectively.”

The move has irked the General Purpose Committee responsible with the budget approval processes, and its members have now threatened to only operate when funds are available.

“You may also wish to recall that at the 41st Extra-Ordinary meeting of the EAC Council of Ministers held on August 4, 2020, the Council directed that activities should only be scheduled when there are sufficient funds in the account of the EAC Organs and Institutions,” said Mr Namara.

EALA speaker, Mr Ngoga, also took issue with the decision by Tanzania to block the MPs' payments, saying the legislators deserve to be paid for work done.

“As for Members' entitlements, EALA did not stop working because of the pandemic. None of EAC organs did and none of the parliaments in the region did,” said the Speaker.

He blamed EAC partner states for failing to increase and meet their budgetary obligations on time, resulting in the current stalemate.

“Partner states initiate the budget proposals. For many years it has been with 0 percent increment despite the growth and expansion of the Community. That same budget is financed at the average of 65 per cent every year. The cumulative deficit is what is causing problems, not any other reason,” said Mr Ngoga.